This is the place to ask questions about your engine components like cams, valves, pistons… just anything that is generally "engine" specific. This also includes questions about exhaust systems such as exhaust manifolds, piping size, mufflers, ect...
Post Reply
6 posts • Page 1 of 1

I'm interested in installing a catback exhaust on my '03 SXT! Don't worry, I don't have illusions of picking up power. I just want a little more growl coming out of my car's ass.

Seems like over the years, the pipes and clamps have corroded to each other pretty good; The car is generally rust-free but you know how exhausts get. Is there any trick to getting the joints in the exhaust to separate without just cutting them apart or is that not feasible? (I'm a little apprehensive to start chopping up 'good' parts in case for some reason I can't get the new catback on.) Otherwise, I guess I could go pick up a sawzall

Keep soaking the joints with penetrating oil. The exhaust was pretty well rusted on my '01, the clamp bolt had even nearly rotted in two, but with a bit of soaking, and then using the muffler as a leverage tool, I kept twisting it up and down from the outlet end, and got the pipes to come apart. The mid section, you can do about the same. If you have at least a propane torch, heat might help the cause too.

The issue I had though was the rust had made the inlet to the cat very soft, and it was beginning to collapse on itself, so I had to replace that too.

If you come to that, I would get a universal cat, a universal four bolt flex joint, and make or have made a converter assy. The Magnaflow direct fit catalytic converter has a worse inlet than the factory unit. That was the mistake I made.

If you can locate a 2.5 or 2.75" flex joint, and have that welded to a same inlet catalytic converter, then go with the cat back, you might actually gain a little top end power, along with a more aggressive note.

Or something like THIS and reuse the flange from your catalytic converter.

Getting the nuts loose from the manifold to the catalytic converter might be more challenging than getting the exhaust apart though. you only apply force to the nuts, as the bolts are splined to the manifold, and will not turn. The good thing is those are still available, if you break them off. The bad thing is they are a bit pricey. And you may need to remove the manifold to get enough swing room to pound the broken stud(s) out.

I was lucky, as I only had to hacksaw the bottom nut to get it removed. But that was not fun, given the room to move the hacksaw. A sawzall may work better, but not cutting the stud may not be so easy.

The 2gn manifold is pretty decent, a shorty header won't make much in gains over the manifold. But if getting those studs out proves difficult, a cheap header might be one option. The last stud I removed, I had to use my shop press, and it came out with a healthy bang. Hammering wasn't working too well.
Bill

Hopefully I won't have to do much to the cat pipe other than clean it up on the mating side to the new parts. The factory clamps and hangers are all in fine shape, clamp nuts loosened up without much effort though the clamps themselves feel like they've become one with the pipe. Fingers crossed that's mostly a good sign?

I'll give it another go this weekend with more penetrating oil, heat, and twisting from the muffler. Appreciate the advice, occasional demons!

If memory serves me correctly, the clamps are spot welded to the factory pipe. It's been 11 years since I have removed the factory pipes and went with TruBenz stainless.

I used Walker band clamp style clamps to connect the new pipes. They don't crush the pipe like u bolt clamps, and make removal a breeze. where the pipe are slip fit, I use copper antiseize to help keep them from bonding, even on stainless pipes.
Bill 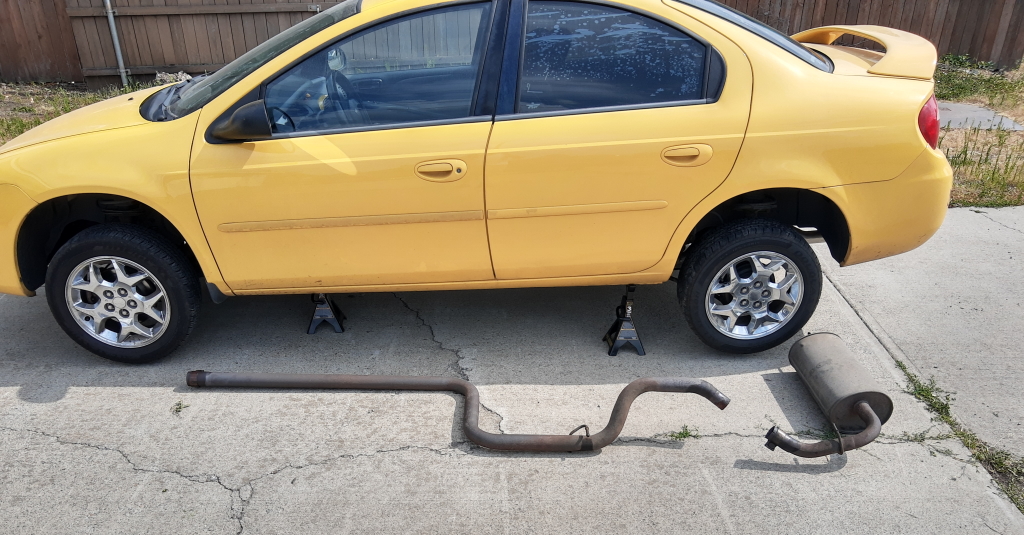 Well that was fun

The joys of lying on your back, wrestling with an octopus with less than 6" of clearance between you and the floorpan...

But you got it done!