Pretty much what the title says, all off-topic related posts can be posted here to share with everyone.
Post Reply
84 posts

I am sure they offer tunes for them too, but that would affect the warranty and the reliability of it. I think just keeping it simple like what you said is a good idea. Carbon would look good on the eXterior. Like a carbon front lip and rear pvo style spoiler. Just tough to keep in good shape if daily driver. Mainly anything on the front end that is
08 Acura TL-S
05 Neon SRT-4
Top

ya im pretty sure arkansas is the same way but we bought in OK so we'll see how it all goes.

oh ya they have tons of tunes.. like 4 or 5 main ones plus more small ones... some dealers even offer warranty approved tunes! they have tunes that optimize with minor stage one tunes, or tunes for CAI and new down pipes that offer a really good boost. the base tune for the stock engine is +67 hp and +93 lbft if you add in a CAI, that goes to +78 hp and +108 Tq so i could be past 300 tq and about 300 hp for about a grand... i would probably keep it all mild.. it has a good powerband currently so im not wanting just yet but give it a year or so and that will probably change..

ya i liked the carbon i had on my first neon against this shade of blue, just need to pick up some pieces and get to modding. i will probably do the pvo style lip first and do the splitter later as it is daily driven... but i want an exhaust, just need to see if i pay for one at 500$ or see if i can weld my own like i have on past neons...

How long is the warranty for the tunes usually btw?
Top

I dont know if there is a warranty on tunes... never got one and assumed they were as is kind of deals

but as an update here i got the car back from the body shop and they did a great job.. well worth the month they had it (weather and logistics delays) to make sure they got it right.

had them leave the badges off the trunk when they sprayed it in and saved me the time of debadging.. after i picked up the car, my wife went into labor and we had our son 5 hours later!

put in a LED strip for the trunk light like i had done in neons prior and it makes it so much better. this is a great 20$ mod for any car with a trunk!

I got the carbon lip spoiler in that i ordered, i love the way it looked from behind... blended well with the curves of the rear end but really didnt like the way it just had a blob sitting on top of the trunk like that so im returning it unfortunately... but these pics also show off the debadged rear which looks good and was "free"

Also my wifes 14' R/T Durango for some mopar content.. 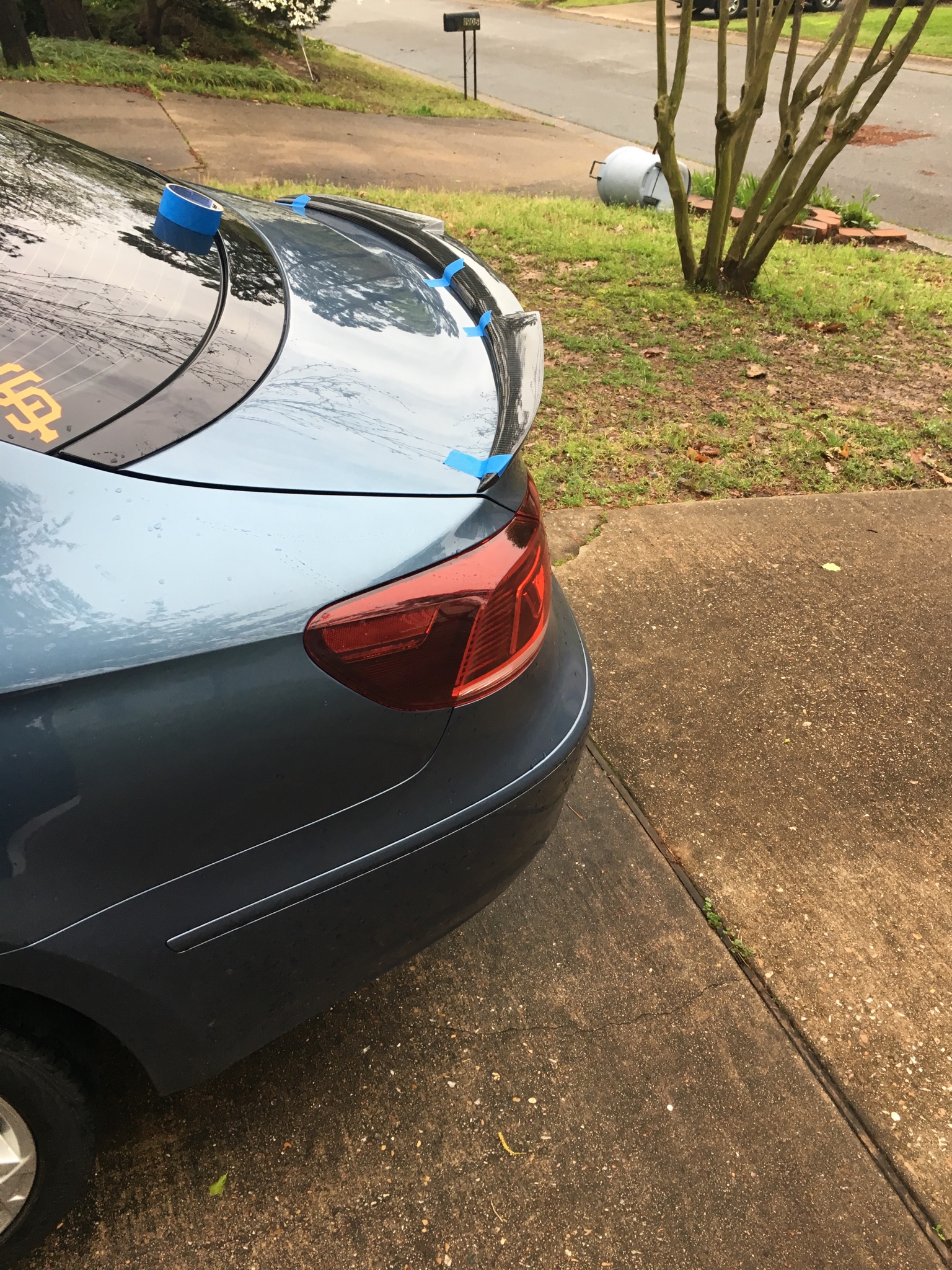 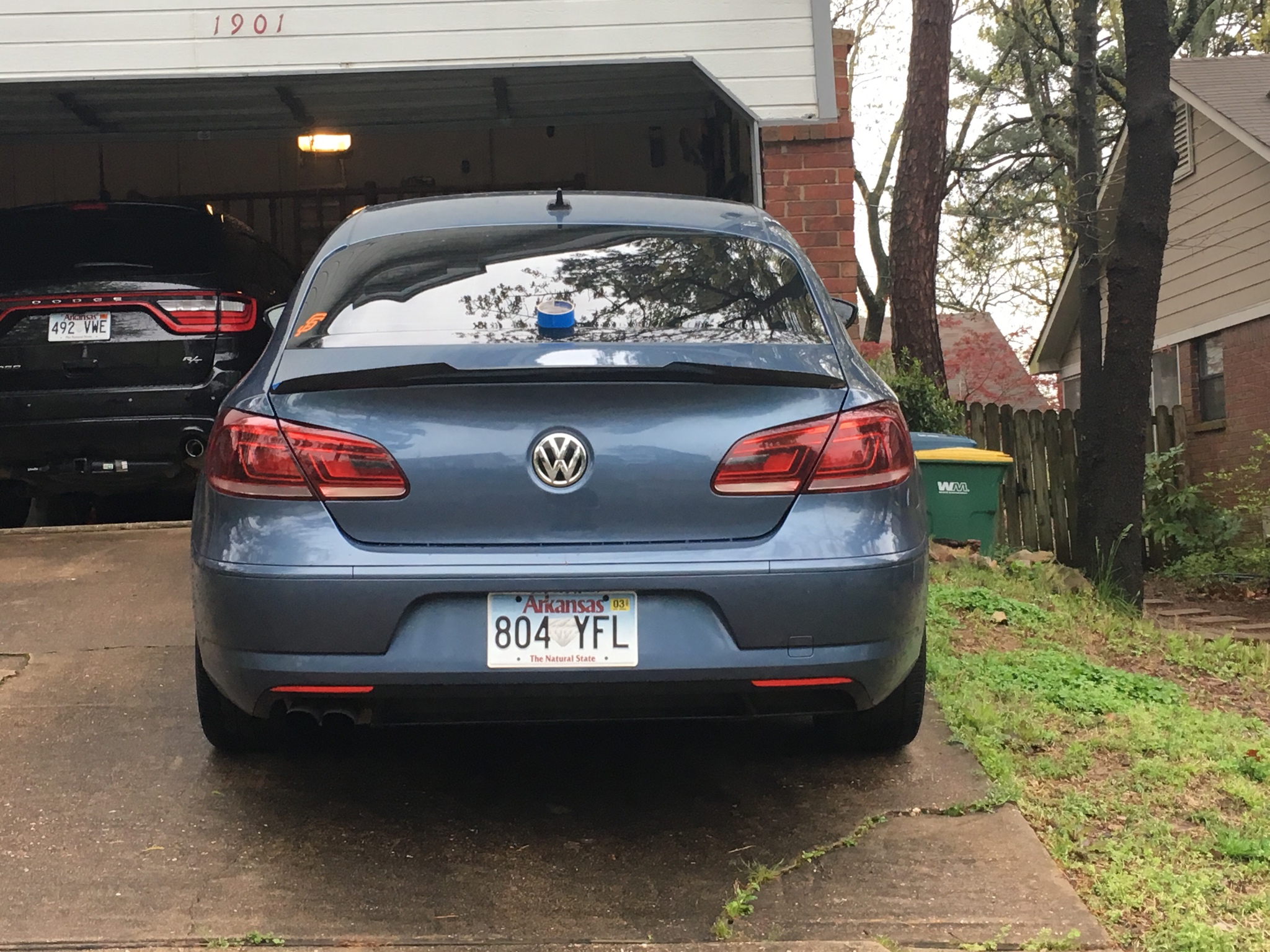 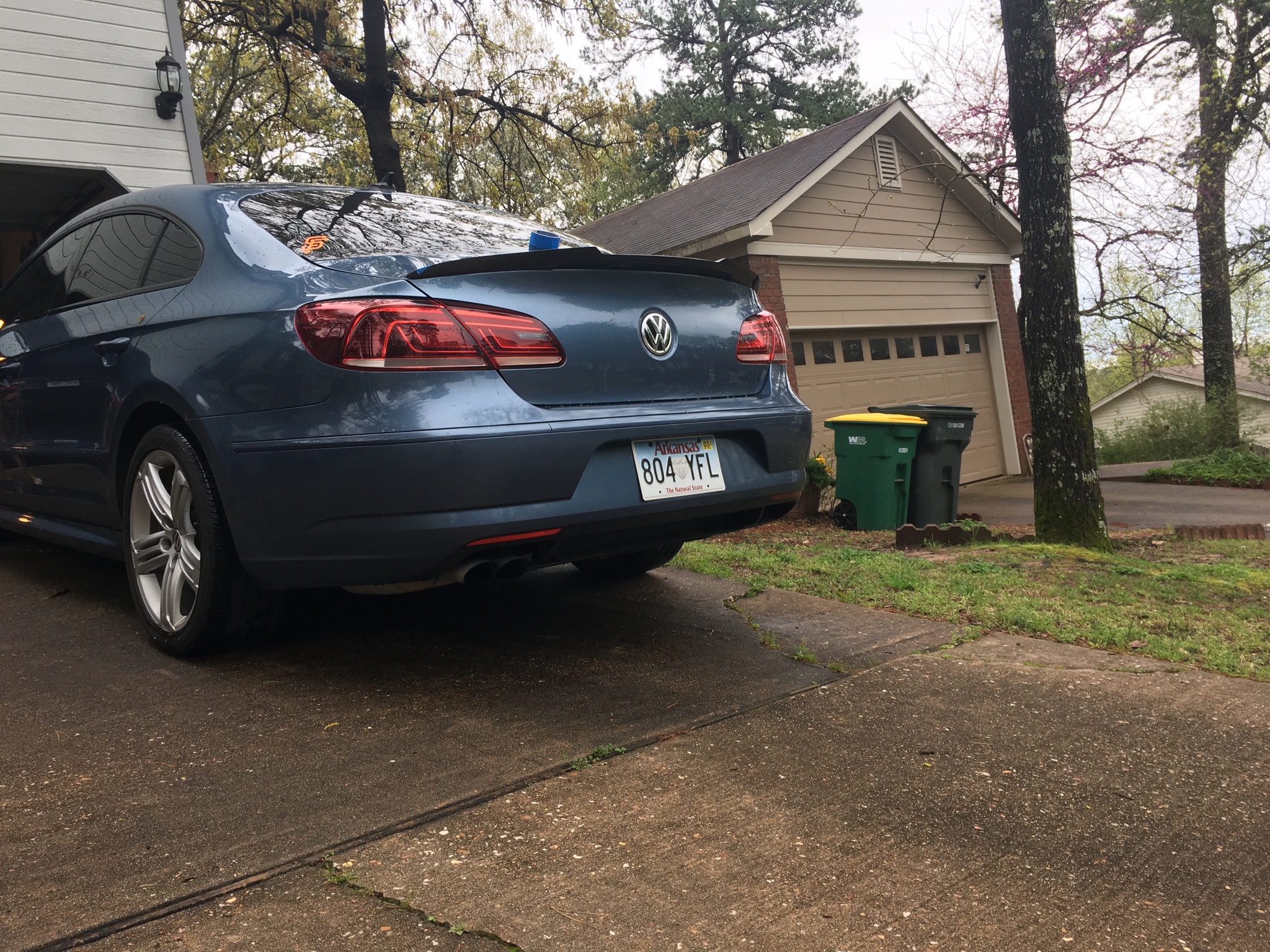 I understand on why you returned it and agree. Now if your car was black it wouldn't look like a blob. After seeing those pictures, CF does not look good at all on that car, especially with those factory silver wheels. The CF doesn't tie in with anything.
08 Acura TL-S
05 Neon SRT-4
Top

Ya, i always liked the PVO lip spoiler on the Neon and thought it looked great, i was thinking this would be a similar look but it just didnt flow... so ill leave it alone.

Took the exchange cash and im rolling it together with the profits from selling my old neon rims and turning it into a CAI, ive found a used one on the VW forums so its only $250 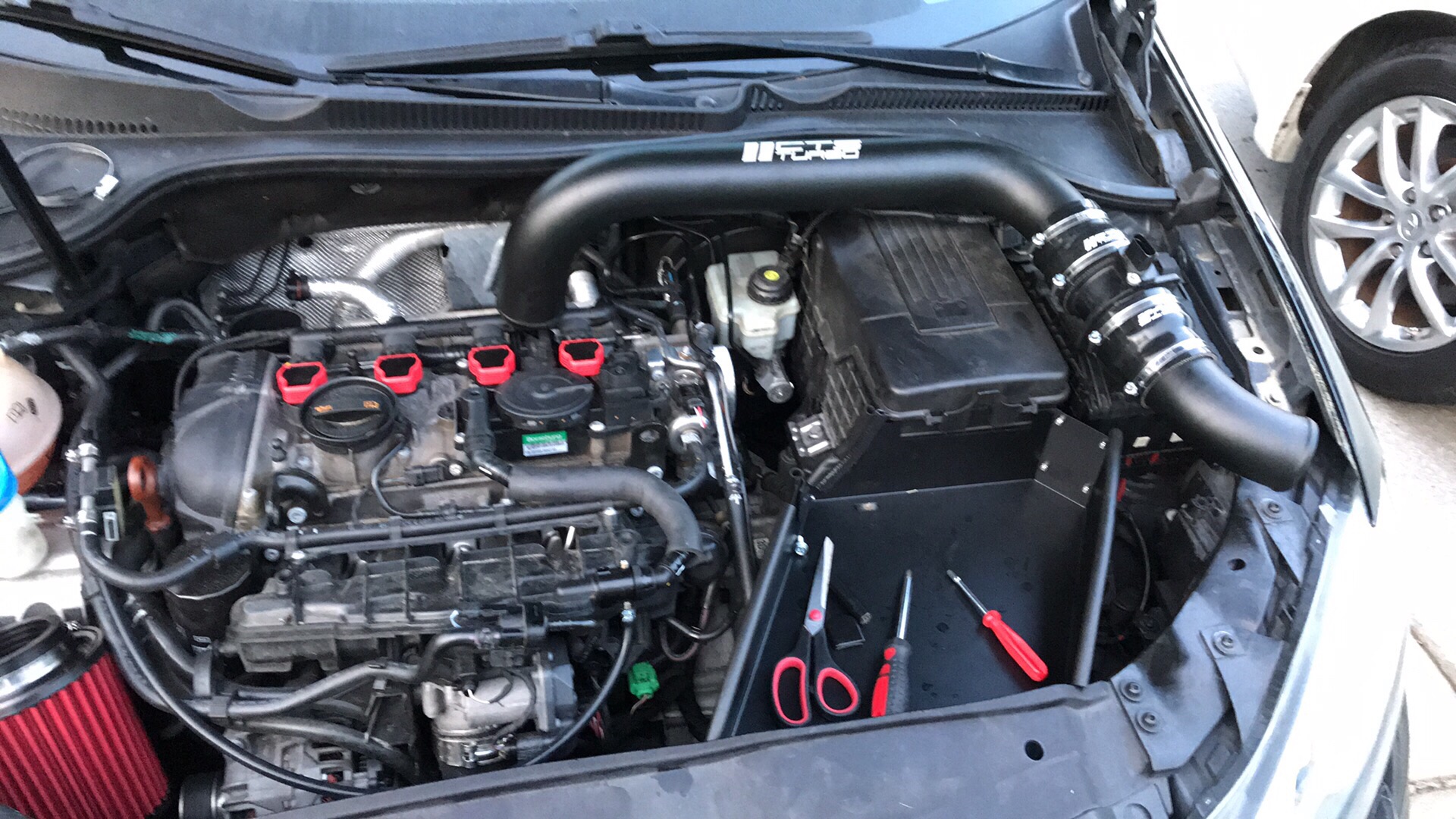 I will say that parts are significantly more expensive on the VW platform... i want a catch can for the Direct injection but damn they are $500

My next step im thinking i want to do an exhaust... aftermarket ones are like a grand so i want to get some decent mufflers and tips and weld my own..

Ya i know.. thing is that the good catch cans have a CNC plate to replace the PCV system that is somewhat prone to failure.. so the actual catch can is only 100$ or so but the whole thing you would need to make it function optimally is 500. but used ones pup up for 200 or so.

As far as updates. nothing as of yet.. the guy that was going to sell me his cold air had family problems and i think backed out of the turbo build he was gonna do so.. back on the hunt for a used CAI. im debating doing like i did on the neon and adding a new muffler and tip to the car. i want a little more engine noise but with a long commute and this being our road trip car i want it nice and tame at 80 still. so now to scrounge up some parts and hope for no riceburner sound.

EDIT: i guess i didnt post my minor updates.. so here they are..

The first is an LED strip light for the trunk like i had on the neon... having all that light in there is a must have once you have done it! easy to do too.

The second is a new radar. my wife got it for me for my birthday and a huge upgrade from my $50 whistler from autozone..its a Uniden DFR7. has GPS speed and location lockout, band filtering and it is AMAZING!! i didnt hear a single false alert on the Ka band for the first like month.. the low speed lockout is a serious game changer. its off below 30 so that locks out doors and stores and all the crap that is annoying.. and i have gotten to trust it so if Ka goes off i slow down and there is usually a cop.. 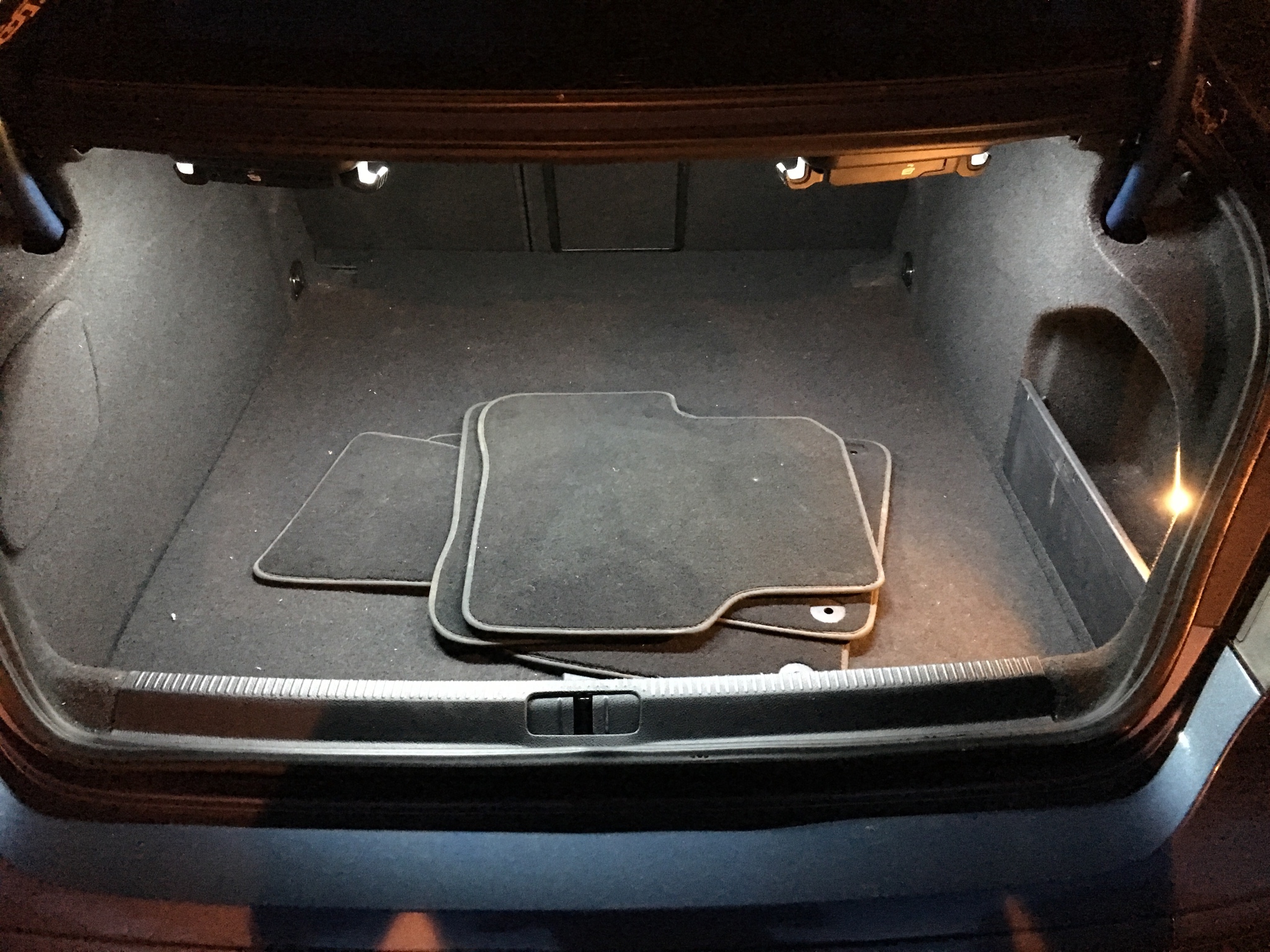 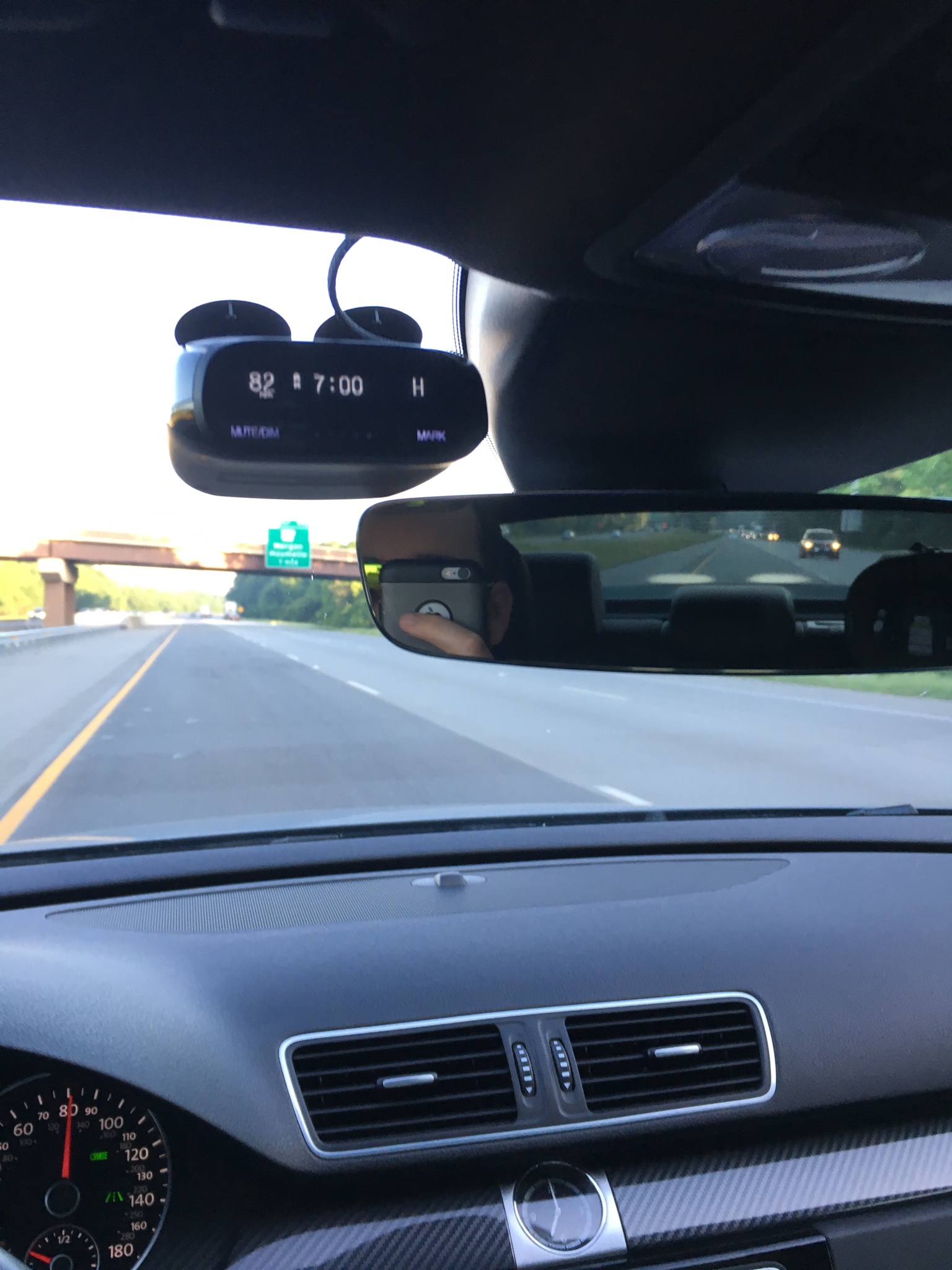 I don't know about VW's, but a universal catch can worked well on my Dodge SRT-4 for years, ... PCV's are relatively inexpensive to replace.
52 Chevrolet Styline Deluxe Sport Coupe
05 Dodge SRT-4

Ya i have thought about looking into one that i can just do the catch can for now and upgrade with the whole system if the PCV craps out. hard part with getting into a new car and make is that i need to use different forums, and much like on here traffic is slow.. add to that that VW vortex is the main one to use and having a more niche model means there isnt much compiled information on this specific model. but its the same engine as a GTI so that helps. Man i wish forums didnt move to FB....

Well the intake i was gonna get fell through so i ended up getting this Open box one on ebay for a "steal" of $240 not terrible considering its like 300 new. the one i really wanted was like 380 after tax and all and i just couldnt stomach that much...

now i just want to isolate the filter a little more than it is here, but all in time. 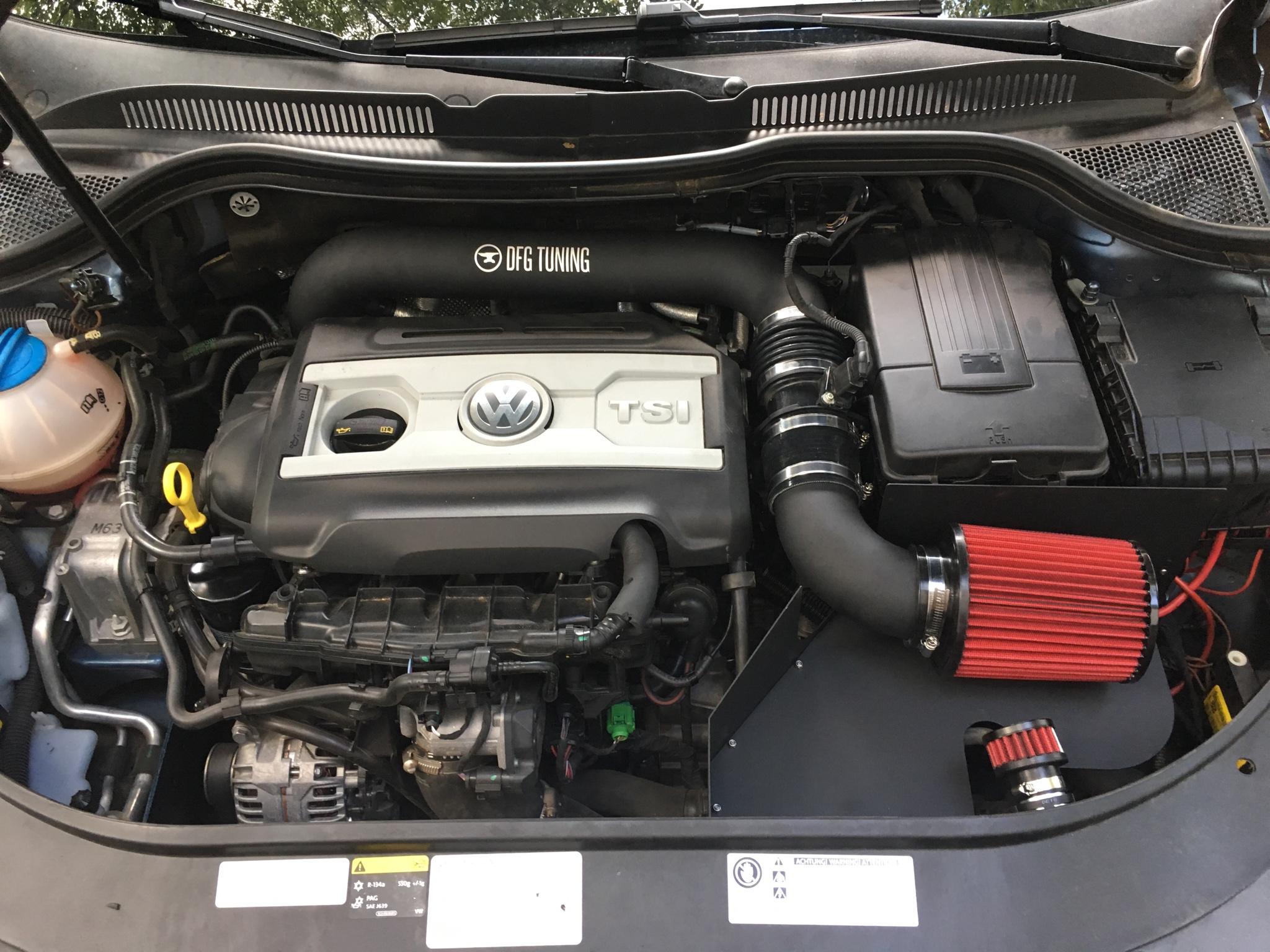 Little more even torque curve it feels like, and a ton more sound. It was really muted before so this opened it up a lot. I’m hoping for a few more mpgs as well.

yay for intakes and turbo noises!

It has been a Fun week! so i have discovered the Blow off valve! there is more noise and there is spooling and intake noises and its so much more fun! there is a little rubbing at low idle that i need to adjust the fitment a little. but it is a worthwhile upgrade for now and will help if i eventually get a tune down the road.

So i had some time and spare paint from the old neon Valve cover and decided to throw some on the engine cover here.. i think it looks much better, the gray that was on there was so plain.. 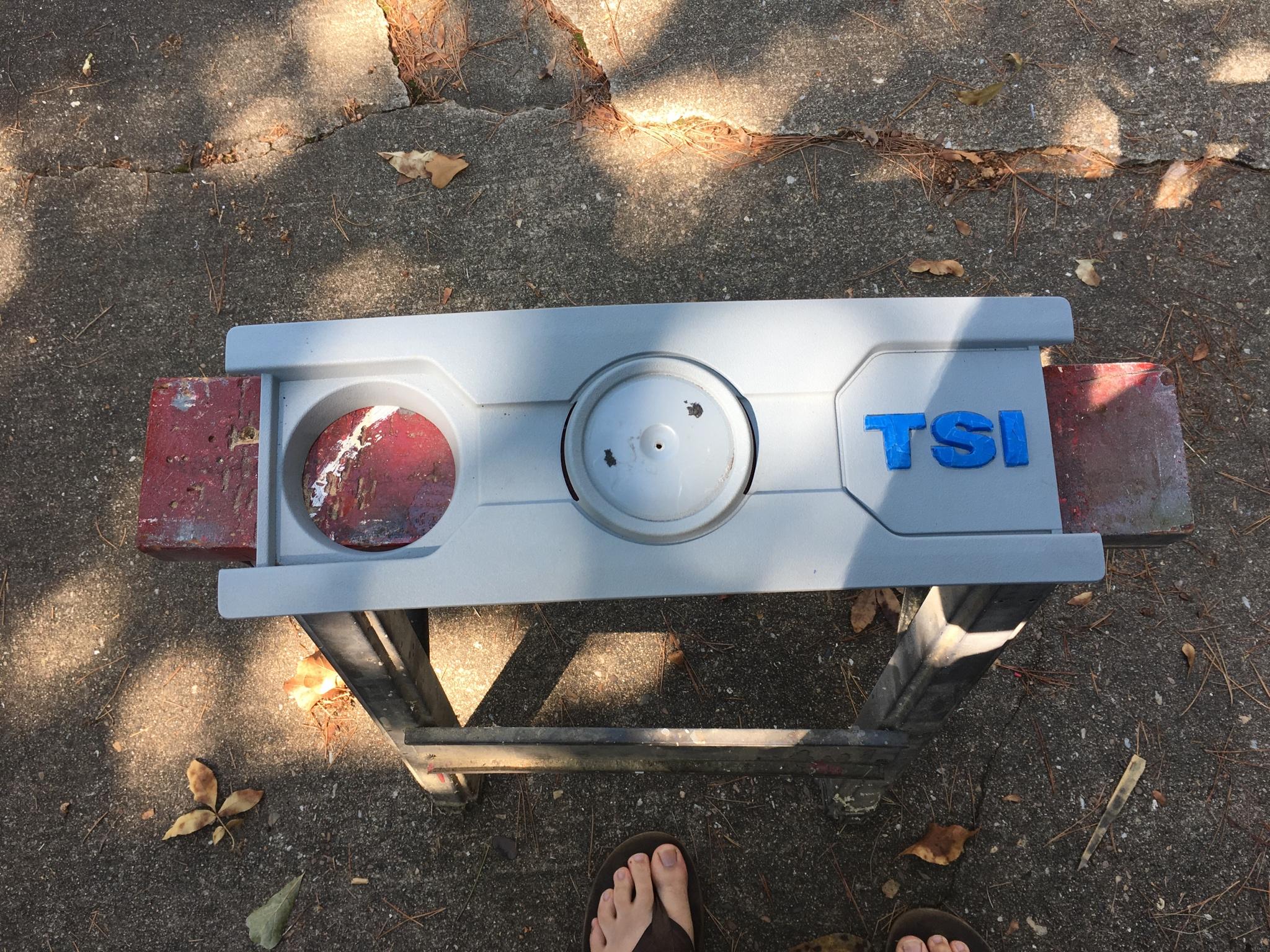 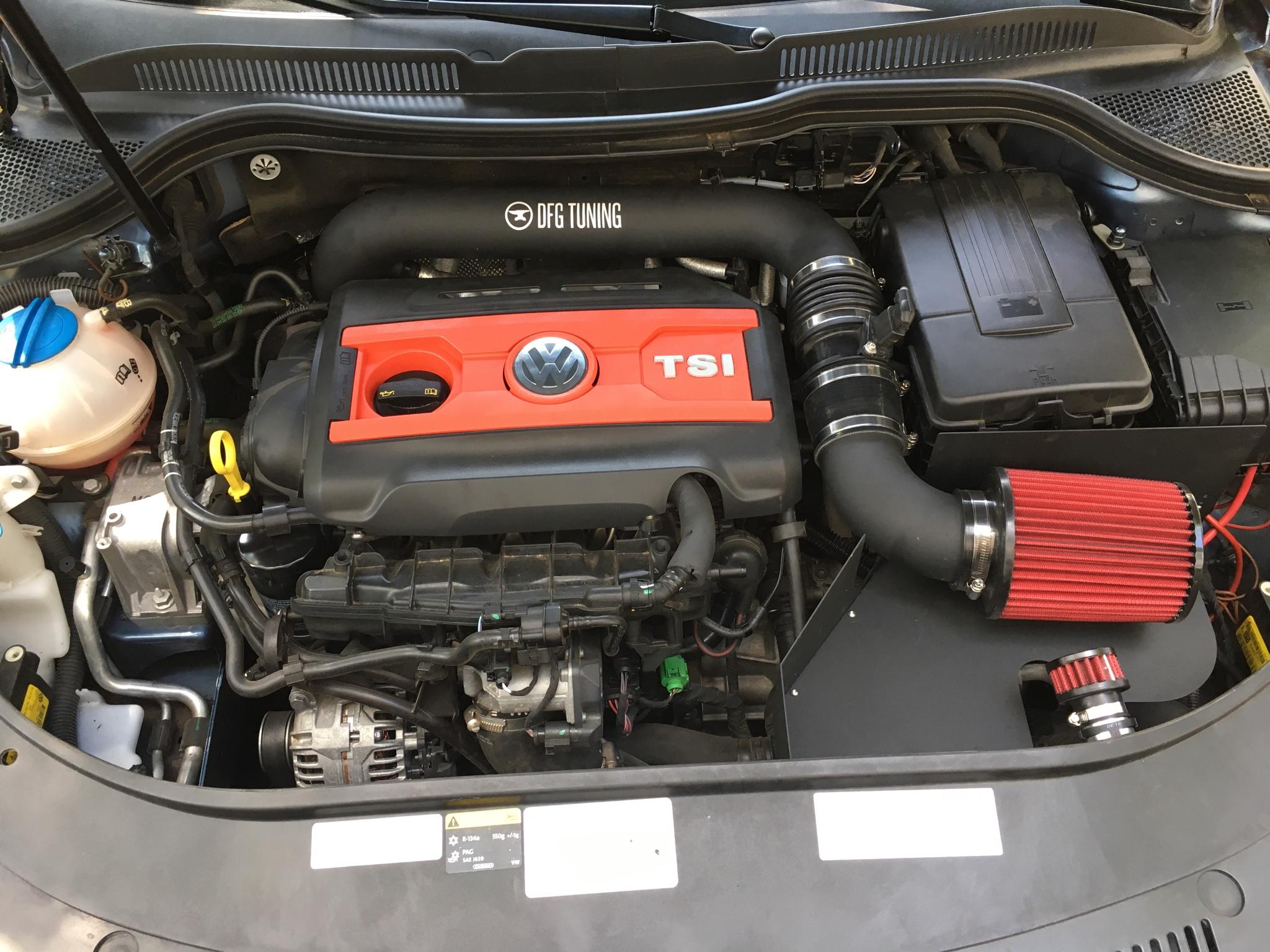 That made a pretty decent improvement for just a bit of time spent.

Plastic under the hood doesn't bother me too much. It is lighter, and doesn't conduct heat, rust or corrode. If only they made the Magnum Im out of plastic. That thing weighs a ton.

Now on the interior, I could do without some of it.
Bill

ya the plastic overall doesnt bother me.. this cover isnt as bad as a lot out there that just cover the whole bay.... my wifes durango got the same treatment on the HUGE engine cover for the HEMI... want to get the challenger half covers for hers...

interior plastics have come a long way over the years... especially since the neon. with the "soft touch" materials in are pretty nice.. really makes it feel more premium.


"Sorry you are so scared of a possible mechanical problem that you will drive an ugly transportation appliance. I'll keep living a colorful life." -some guy about a camry
Top
Post Reply
84 posts