Do you have a project going or will you be starting a project here very soon and just want to keep a log of everything you and when? Share with everyone every step of the way what sort of progress you are making on your project.
Post Reply
72 posts

Never knew that about certain wheels and tires not going on a truck. With Bill on just getting the correct wheels and tires and having them mounted. Then just pick them up in your truck! lol
08 Acura TL-S
05 Neon SRT-4
Top

I plan on putting some aftermarket wheels and tires on this thing eventually, so I'm not worried about it at the moment. I've been eyeing Viper wheels, since they share the same bolt pattern. They require some spacers to clear the suspension, but the look sooooooo good. Some day.
02 base -> 05 SRT ACR -> 96 sedan -> 99 R/T coupe -> 02 R/T -> 03 SRT

I caved in and ordered a new clutch master/slave setup. Like I said previously, they're a sealed unit, so they have to be changed together. I was talking with one of my old SRT buddies and he was having the same issue as me with his trans leaving him stuck in neutral occasionally, so he changed out the master/slave and it cured it. I hope this does the trick. The install isn't terrible, but it's not fun, either. I just hope I can drive the truck without getting stalled in traffic again.
02 base -> 05 SRT ACR -> 96 sedan -> 99 R/T coupe -> 02 R/T -> 03 SRT

In my typical style, I'm planning to paint the wheels on the truck until I can afford something nicer. I have some options. Let me know what you guys think. 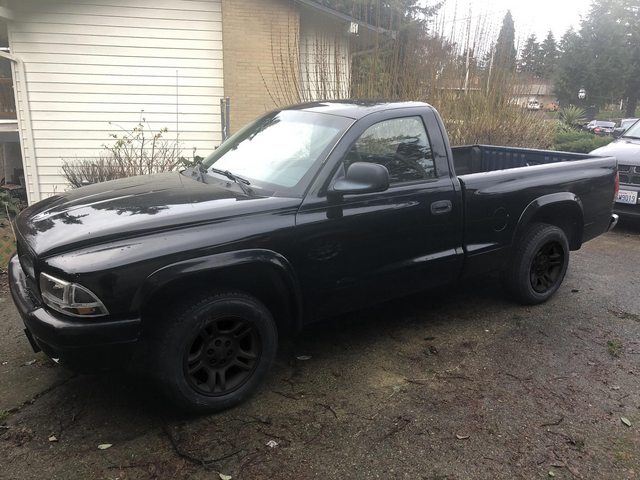 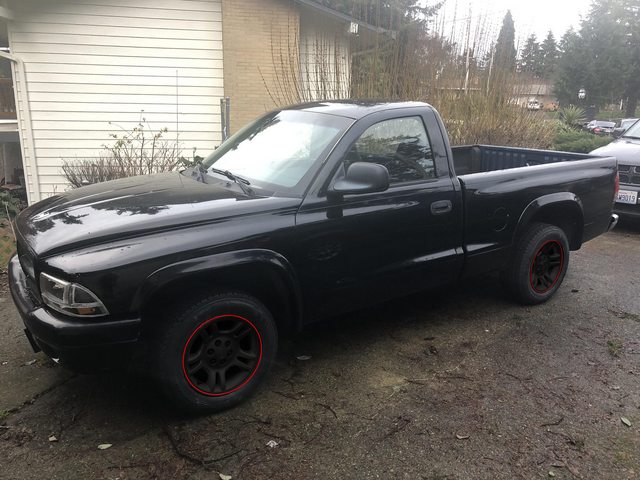 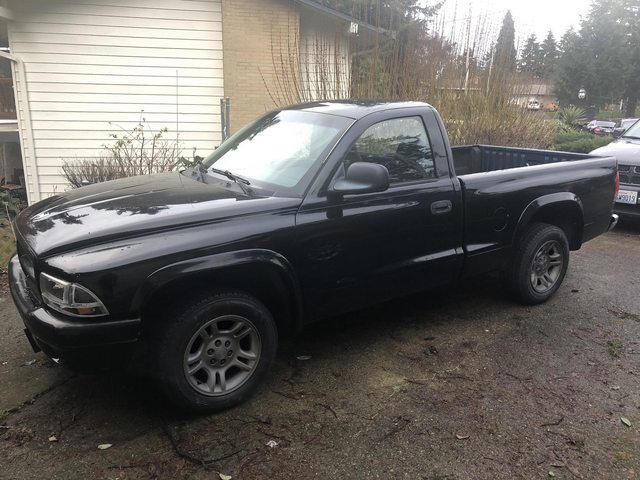 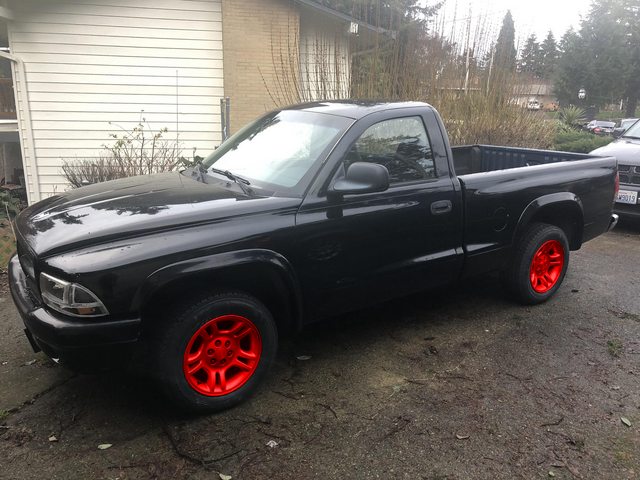 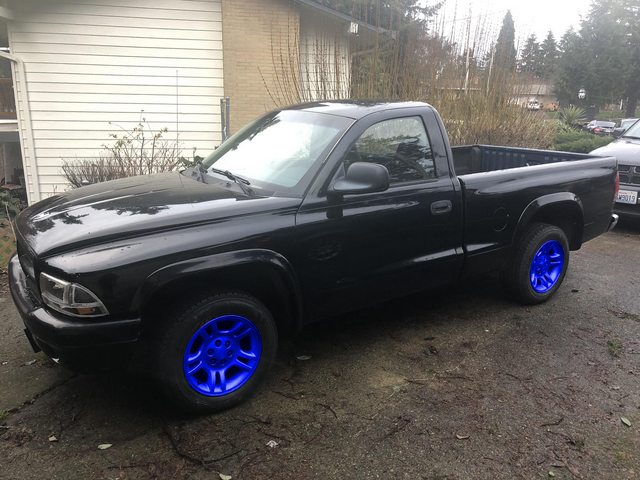 The grey would be either gunmetal or black chrome. The black chrome paint is a multi-step process and I'm wary of it going on unevenly and creating dark spots. I'm leaning toward a more conservative black with a red stripe. The stripe would be reflective, which would look cool at night. A lot of motorcycle guys do it. The blue would be most unique. I could also do solid black and try out some tire stickers. They make "Kumho" stickers that would look pretty cool. They're expensive, though and I'm not super stoked about the tires in general. Anyway, I'm open to opinions.
02 base -> 05 SRT ACR -> 96 sedan -> 99 R/T coupe -> 02 R/T -> 03 SRT

I'm leaning towards the grey, but then I like the stock silver.


Looking at Foresters, I despise the Sport trim...

I wouldn't do the bright colored ones unless your truck was lowered. They all look good. Up to you to decide. If it was my truck, I would do the grey
08 Acura TL-S
05 Neon SRT-4
Top

Oh, it will definitely be lowered.

I got around to installing a new clutch master/slave setup in the truck this weekend. Here's a picture of the new reservoir and if you look closely, you might be able to see the master tucked under the brake master cylinder. It's a snug fit. 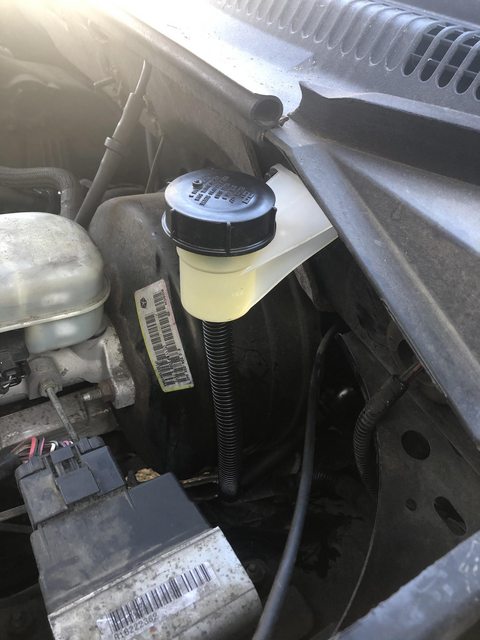 It's really tight against the wheel well in that area. I had to jack up the truck, take the front tire/wheel off, and remove the fender liner. Then I unbolted part of the inner wheel well and had to pull some sheet metal out of the way to snake the master in and out of place. Here, you can get an idea of the forest of brake lines and electrical that I had to weave the slave down through in order to get into position on the trans. Not easy or fun. 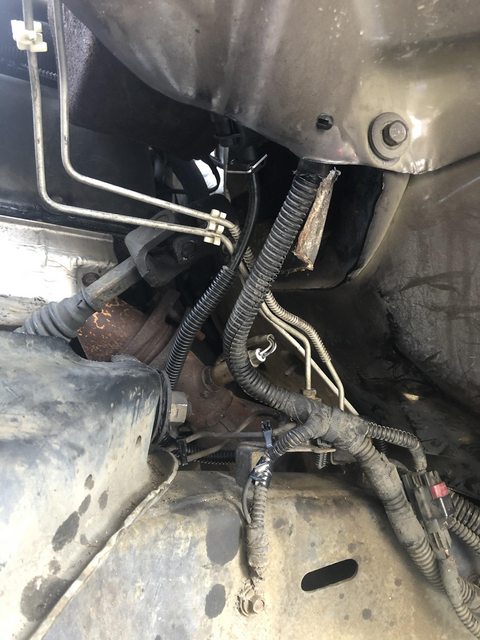 I zip-tied the lines as far away from the exhaust manifold/cat as possible. I might add some extra heat shielding at some point to make sure nothing melts. It gets pretty close to the cat, down by the frame rail. The install was a major pain in the ass. It really should have been a two-person job, but I did it almost completely by myself. The best part is that I finally buttoned everything up, cleaned the driveway, went to start it, and... nothing. Not even a click. After trying to jump it and fooling around with the clutch switch, I remembered that the rod that connects the clutch pedal to the master had a plastic washer-like spacer on it that I didn't transfer over to the new unit. This created its own set of issues because I couldn't remove the old rod from the master; it was really stuck in there. So I took a hacksaw to the rod and removed the spacer that way. Then I had to figure out how to transfer it onto the new rod, which had already been inserted into the new master and wasn't designed to be removable. I took the trusty hacksaw and cut a small, wedge-shaped slit in the side of the plastic spacer, so it would "click" back onto the new rod. It took an extra set of hands, but it worked. The spacer firmly clicked into place around the rod, while maintaining it's structural integrity. I hopped up into the driver's seat, turned the key, and... success. It turned right over.

So far, it seems to have cleared up the shifting issues I've been having since the trans was replaced. I've driven it twice so far and it never left me stuck in neutral. The shifting is nice, too. Fewer clunks and better engagement. I can actually heel-toe downshift now, without grinding. I guess the hydraulics were just plain worn out. There were no leaks that I could see, so it just goes to show that the master/slave setup can be bad without the usual visible signs.
02 base -> 05 SRT ACR -> 96 sedan -> 99 R/T coupe -> 02 R/T -> 03 SRT

Looks to be as much fun as changing the crank sensor on my XJ. I got to do that three times.

I think crank sensors on those are like the cam sensors on NGC neons...


One good thing about the Subie is most things are on the topside, and easily accessible. The only PITA is the spark plugs.

The sensors are all mostly visible/accessible though I have yet to actually change one. The master/slave are right on top, and the starter is beside that.
Bill

Sounds like a whole lot of headache. Glad you got it all buttoned up though and it shifts well! Hopefully you got to enjoy a nice beer after that one!
08 Acura TL-S
05 Neon SRT-4
Top
Post Reply
72 posts