Do you have a project going or will you be starting a project here very soon and just want to keep a log of everything you and when? Share with everyone every step of the way what sort of progress you are making on your project.
Post Reply
615 posts

After getting the shot of you and Ralph at Carlisle, I didn't see what he autographed! Thanks for posting what I missed.

The brakes are all done, the wastegate is fixed, and the thermostat is changed.

Dad and I modified the front bumper last night...opened up the "mouth" for the intercooler to get more air. I haven't put the bumper cover back on the car yet, but I think it's going to look really nice.
-Dave

Awesome.
Post some pictures when you get it back on.
08 Acura TL-S
05 Neon SRT-4
Top

Well at least you are a fair distance from the current insanity going on over there.
Bill

Yeah, pictures coming. I'll probably take some real pictures with the Nikon one of these days.


Bill - The craziness in St. Louis is just absurd to me. At this point it's national news front page headlines. I'm glad it's not in my backyard, that's for sure.
-Dave

Quick pic of the front bumper. New racoon headlights and some fresh foglights as well....passenger side foglight got broken on the trip to Carlisle. 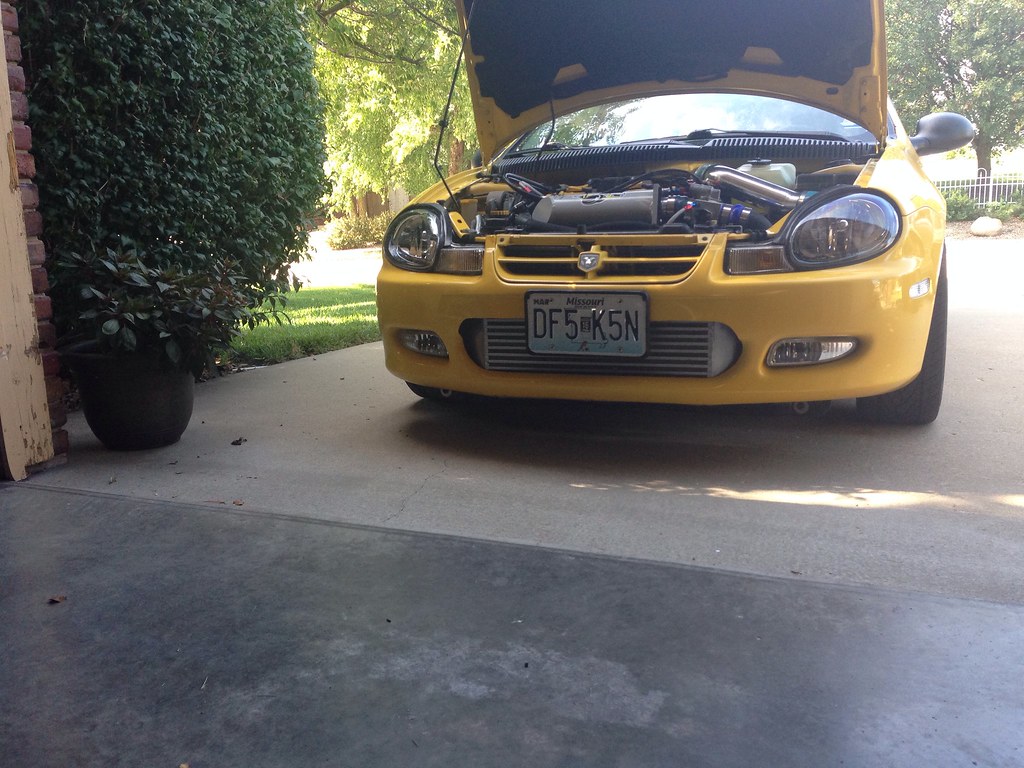 Last night when I took it out for a quick drive, I blew the hotside pipe right off the turbo.

I forgot to turn the boost controller off and do some pulls to check the new crack pressure of the WGA, since we had the WGA off and pre-loaded it differently than it was before I'm sure. Anyway, when boost hit in second gear I had that sensation like the car was going to drive off and leave me behind...like a helpless passenger along for the ride getting smashed back into my seat with no control. I'm pretty sure the boost spiked to 20. Followed by a loud Pshhhhh! ....but I still had the throttle open. No boost after that. I had an idea, based on the sound, what had happened, but couldn't reach back there and check until this morning. Sure enough, the pipe came right out of the coupler.

All that said, 20psi (or whatever I hit) felt ridiculously fast. Now I want to get it on the dyno...
-Dave

quicksilvr wrote:...I had that sensation like the car was going to drive off and leave me behind...like a helpless passenger along for the ride getting smashed back into my seat with no control.

I installed a fresh set of Champion's, did about 10 2nd and 3rd gear pulls, and then came home and pulled the plugs. Granted I had to cruise for a while, so these plug readings aren't ideal, it's not like I shut it off right after a run and then pulled the plugs out. Two angles of each plug, so you can see both sides. 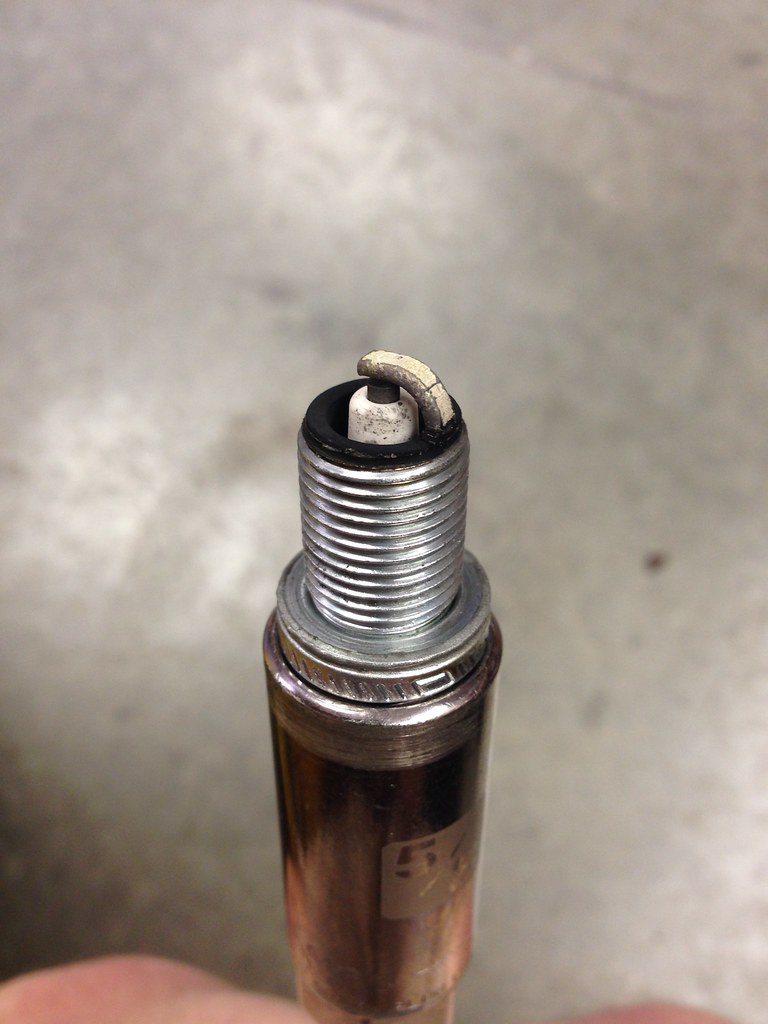 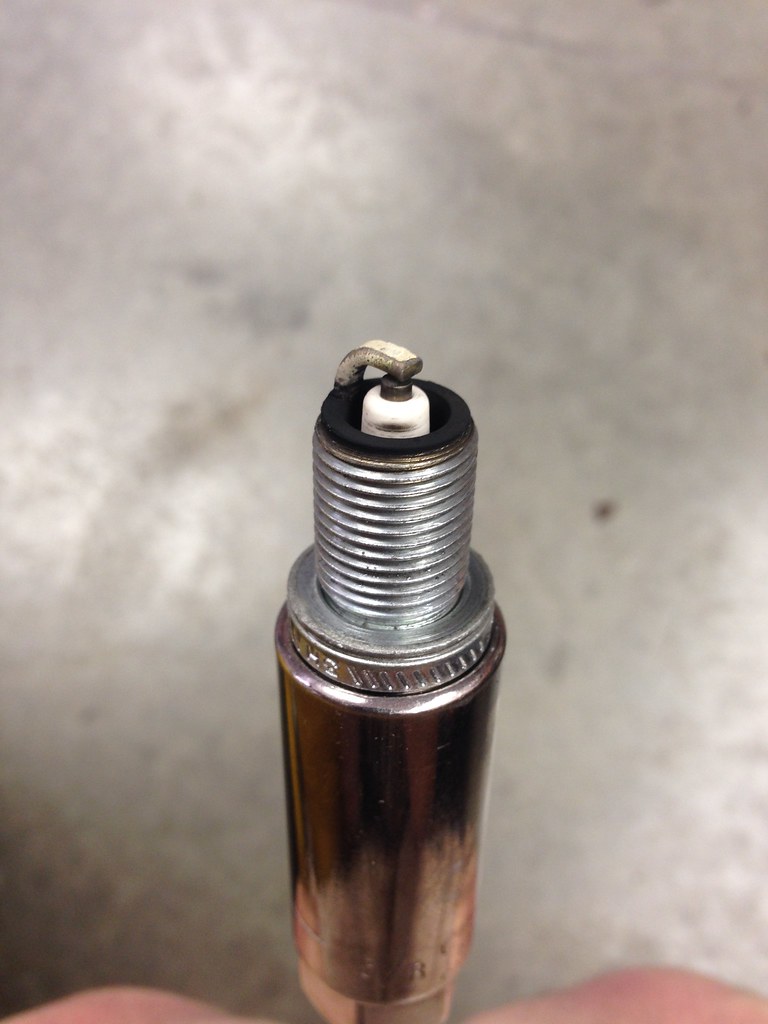 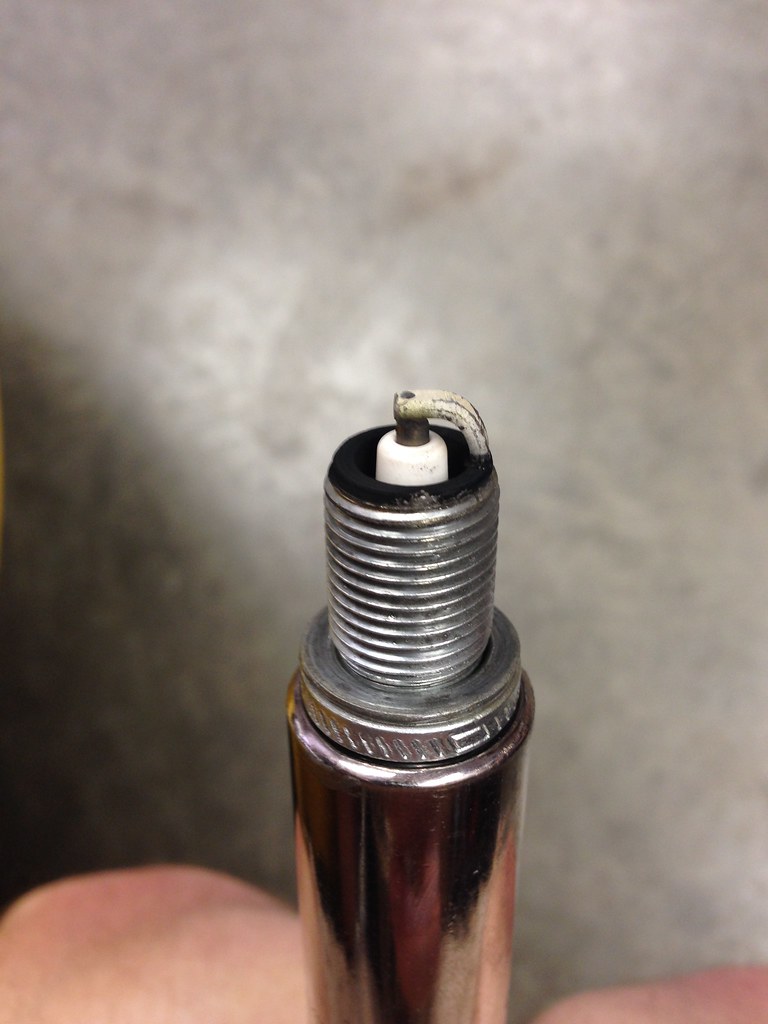 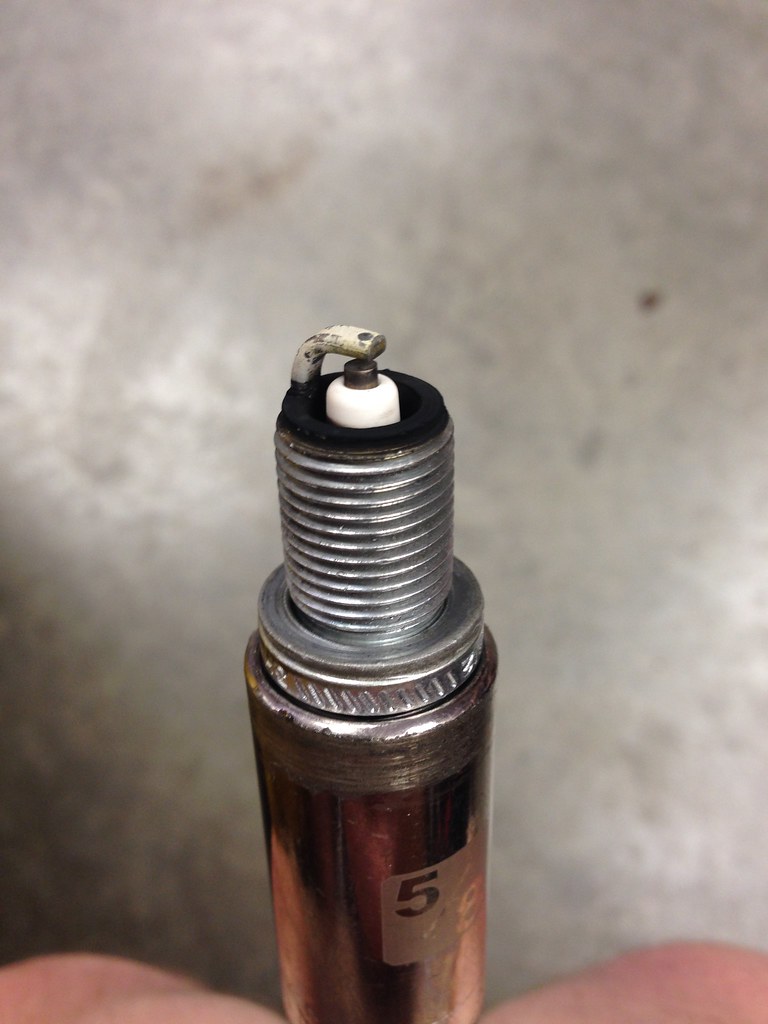 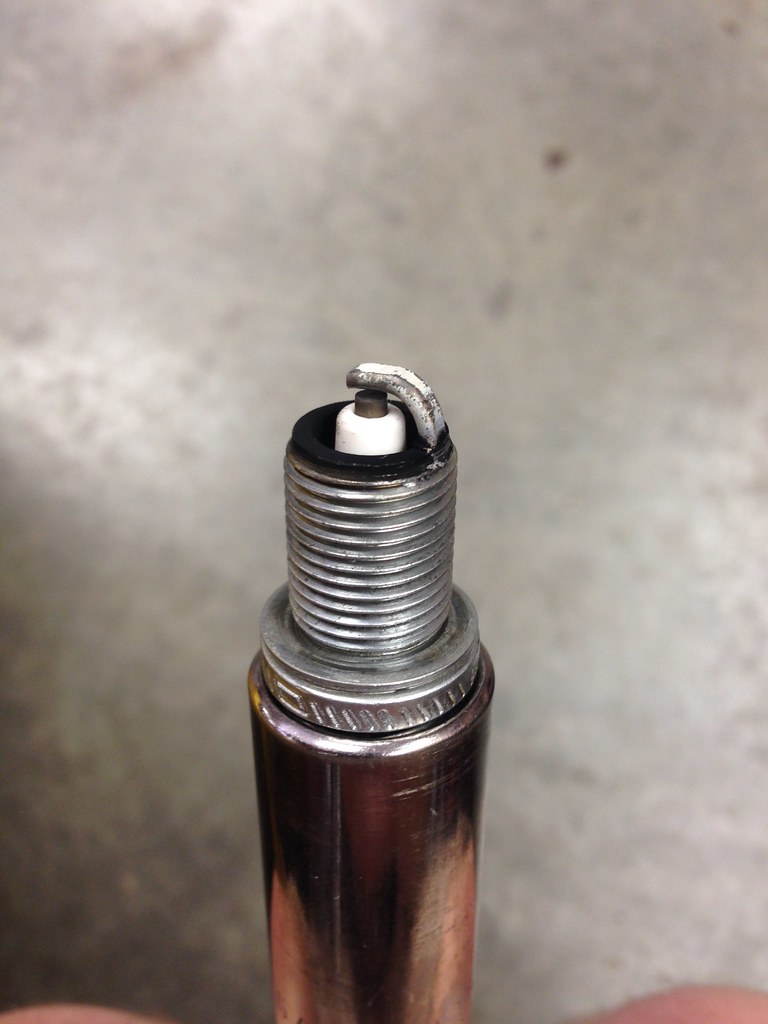 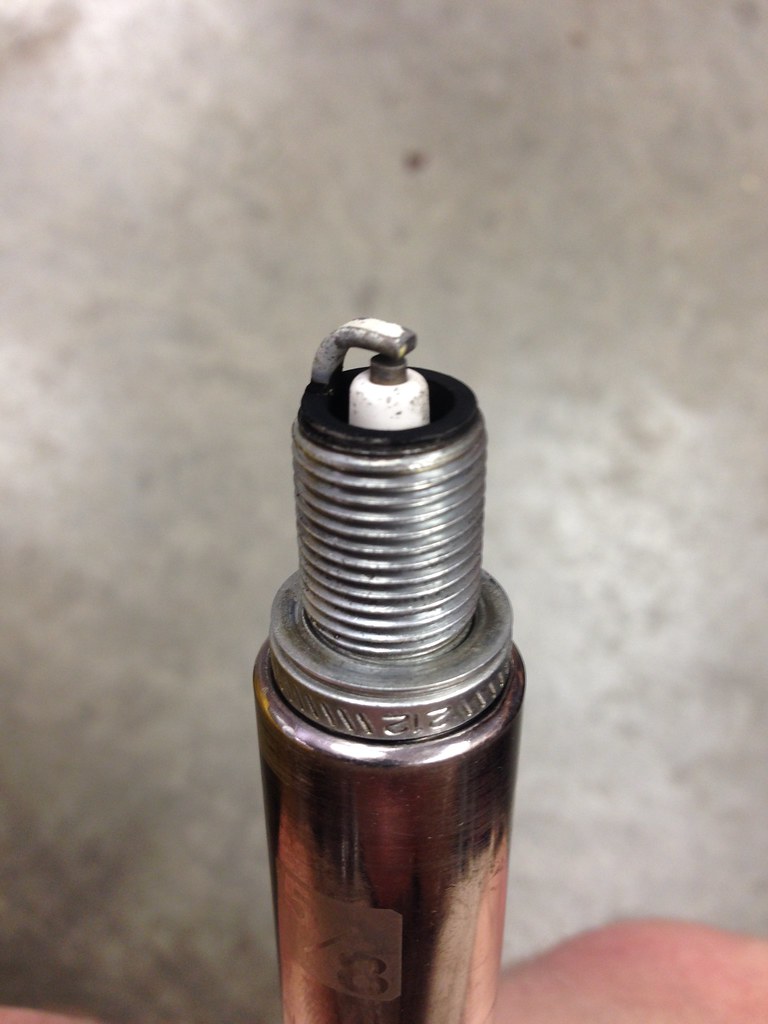 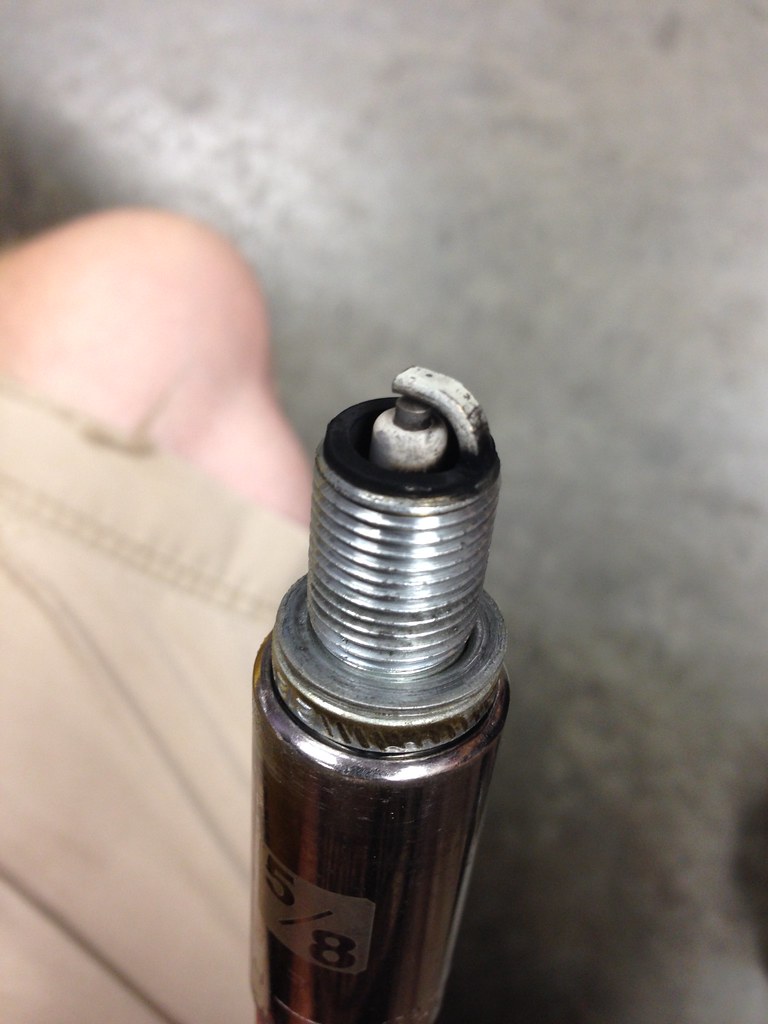 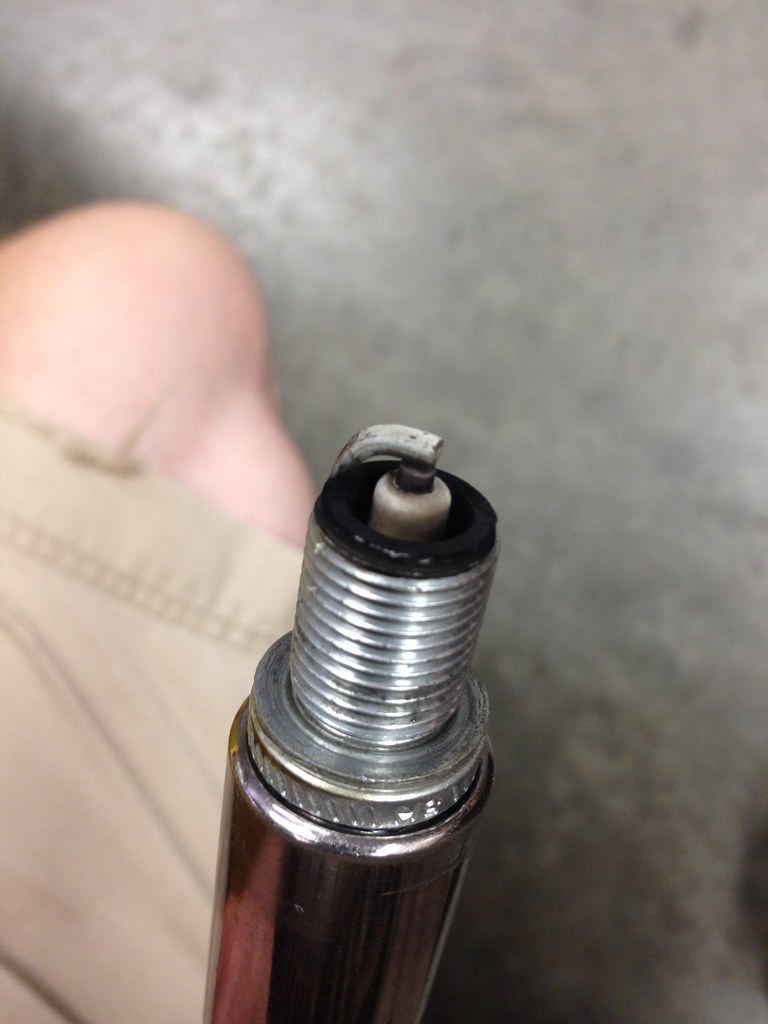 Those plugs are from 10psi, holding to redline, and 11.2 AFR pretty consistently. No audible or noticable pinging, car pulled hard and smooth.

Too me, it looks the whichever side of the plug was towards the intake port got the speckled pre-ignition marks on the porcelain, due to oil entering the cylinder. Cylinders 1-3 are running hotter than cylinder 4. The darkened porcelain on Cylinder 4 indicates that it's cooler than the rest. The base ring on all plugs is quite sooty, which I would expect from running on the rich side...I'm just a little perplexed as to how I got the speckling on the porcelain while running that rich.


When I pulled the NGK iridium plugs after the trip to carlisle, they looked very similiar to this, but with ZERO speckling on the porcelain...and all the porcelain's were pure white and chalky.

Anyone with experience reading plugs, please chime in.
-Dave 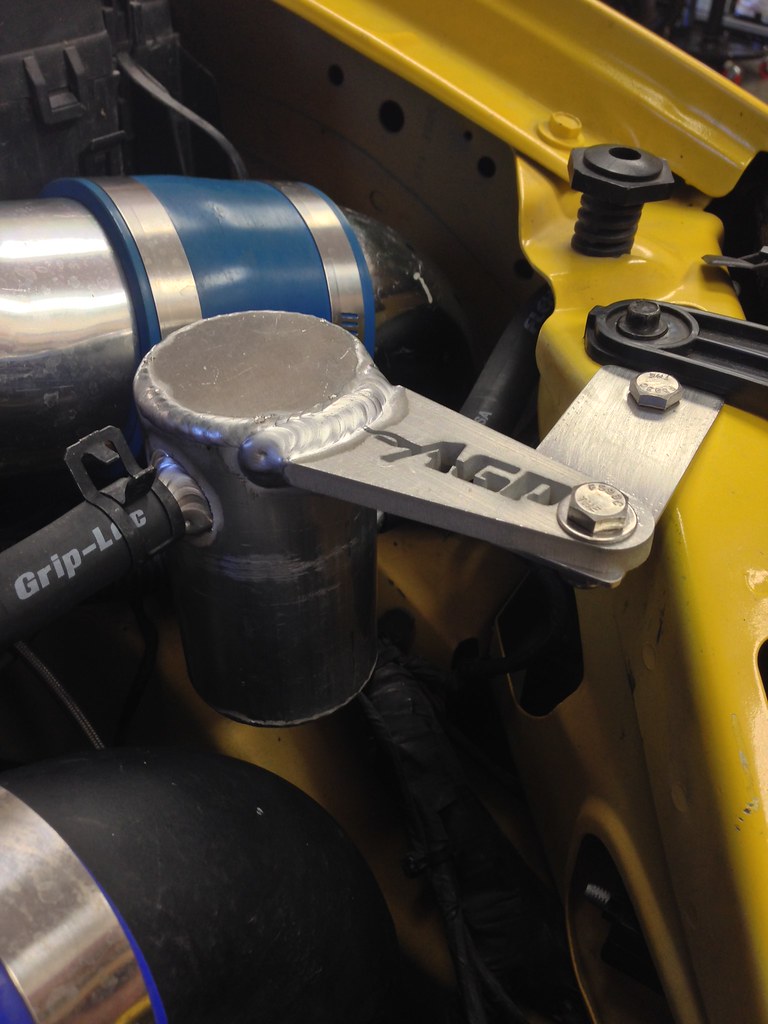 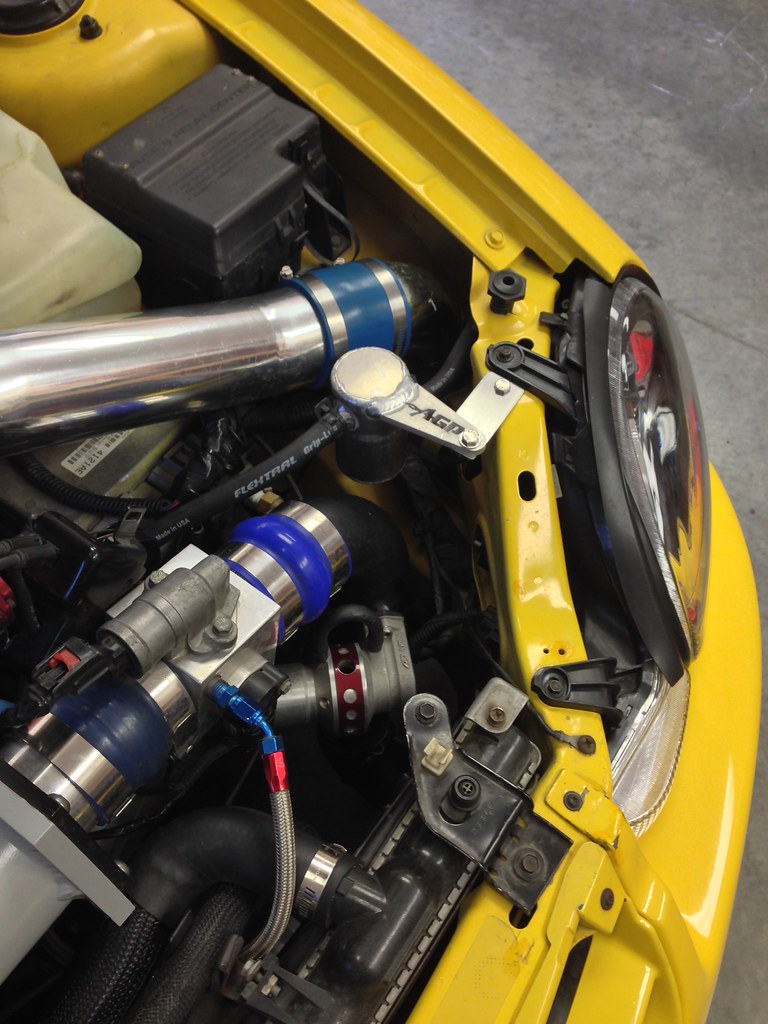 We also took it out for some logging on high boost, and experienced pretty bad spark blow-out for the first time in a while. I could get it to hit 18psi, but only at 20% throttle. Anything over that, and it stuttered badly as soon as the boost rose above about 15. However at 12psi (which is everyday boost setting in the boost controller) it drives perfect with no spark issues at all.

I'm going to try to colder plugs gapped really tight and see what we get.
-Dave

Ever thought about it get professionally tuned? Guy up in Omaha, NE that knows MS very well. Not sure why you would be getting spark blow out at such low boost levels. Those pictures of the plugs looks like you are running a super small gap already?

That black around the base doesn't look good. 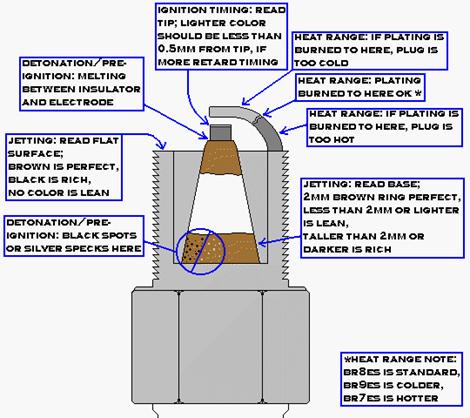 Do you have some logs of the stuttering? Were there lean spikes from unburned fuel? Are all the sensor signals clean (primarily MAP and TPS)?

You could try reloading the firmware too.

It does look like it needs colder plugs. Is all the speckling on the porcelain carbon - no aluminum? (time to pull out the microscope)

It might be interesting to see clean plugs after a WOT run and immediate shutdown, pulling the plugs on the side of the road.
~Josh

Yes, here's a picture of the first two times I got into it to full boost and it stuttered hard 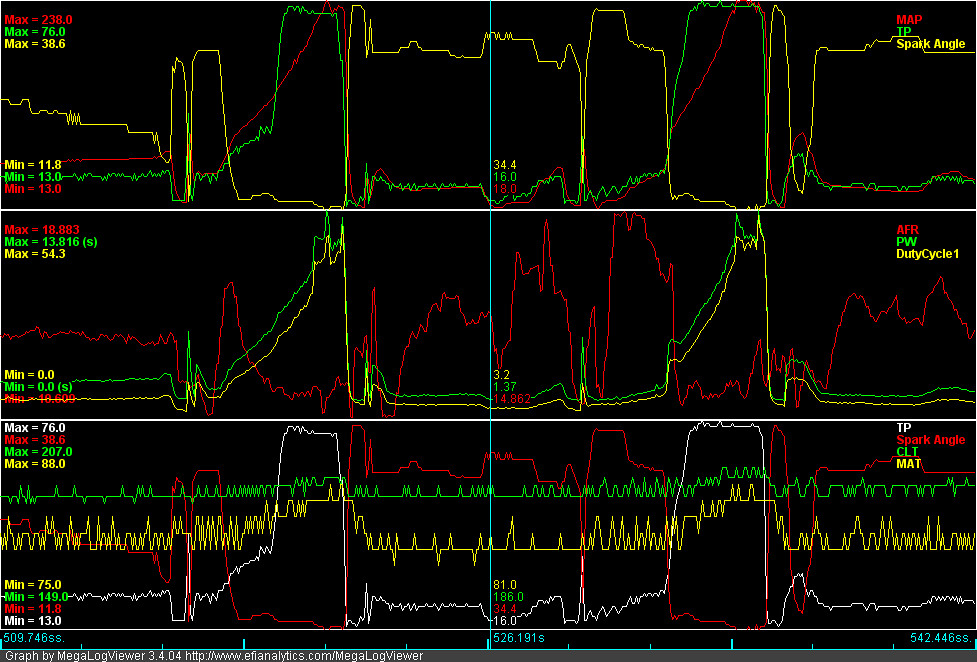 Since you're just re-loading you don't need to jump the bootloader pins on the pcb.

The TPS is the only signal that looks a little noisy. Have you added any grounding cables from the battery to the engine like we talked about? Without looking at it, I don't recall which menus it might be under. but you need to make sure the TPSdot value isn't triggering any fueling events.

And it would be nice to show MAP, TP, and AFR together in the datalog view. You gotta put RPM on there somewhere too.

Ah, rpm....I knew I was missing something meaningful.

I'll ground the battery better and reload the firmware as preventative measures.
-Dave

I'll ground the battery better and reload the firmware as preventative measures.

If you need the batch file for downloading the firmware you can get it here: http://www.msextra.com/doc/general/downloads.html

Go to the link for the high res 11d firmware
~Josh

That batch file for loading the firmware doesn't work on 64bit Windows. Is there a newer file somewhere?
-Dave

quicksilvr wrote:That batch file for loading the firmware doesn't work on 64bit Windows. Is there a newer file somewhere?

Download that .zip file and extract to your MS project folder. Then run the new .bat file from there.
~Josh

The car is beginning a 3600 mile road trip today. Dad is taking some time off and driving to Phoenix to visit Josh (turbodudey) and then continuing up to Dillon, Montana to see some family friends, and then heading back home.

I'm sure he'll take a few pictures along the way, I'll be sure to post them when he's done.
-Dave

Let's hope for good weather and a safe trip!

And an oil change for Quicksilver when he? she? returns. Maybe one for Dan too.

Haha, oil change for both would probably be a good thing. Dad arrived in Phoenix this morning. All's great so far.

I set the boost controller on the "everyday" driving setting of 12psi before he left, so that should keep him out of trouble....mostly.....
-Dave

Pfft, we old men have more experience at getting into trouble.

Dad is back from the trip (4300 miles total), and now I'm driving the car every day while I work on my 4runner.

I first experienced it at high boost (18psi), but it was only when boost spiked and the torque peaked. Now, I can make it slip at even 12psi if I open the throttle most of the way and let the boost hit hard. If I go into boost with the throttle gently (not WOT), then I can keep it from slipping and it will hold full boost at 12psi. But definitely slips if I go WOT into boost.

What gives? I thought the ACT 4 puck sprung setup that I installed was good for 400ft/lb of torque? There is no way the car makes near that much.

The rear main seal was completely dry when I changed the clutch, and doesn't appear to be leaking now either. Engagement is perfect, and it even chatters a decent amount if you don't slip it enough taking off from a start. So I feel like it grabby....but it just won't hold the torque of hitting boost hard.

quicksilvr wrote: What gives? I thought the ACT 4 puck sprung setup that I installed was good for 400ft/lb of torque? There is no way the car makes near that much.

Or... maybe it does. It could be the combination of that head/cam/turbo makes a torque curve that peaks at a relatively low RPM.

So peak HP could be a calm 350, with torque peaking upwards of 450 ft*lbf if that was occurring down around 4000 rpm.

If you peek at the old dyno graph from that car the torque curve is basically flat from 3900 to 6000 rpm, with the biggest bump at 4600 rpm. (and that was a terrible run too... less than half throttle, spark blowing out, piston skirt trying to eat the cylinder wall for lunch...) It doesn't seem to absurd to image with the new setup (bigger turbo, overall higher engine VE, etc) that torque peak could be at a lower rpm and a considerably higher value.

The clutch is afterall... slipping.
~Josh

Well said Josh. Thank you for shining notable light on this curious situation. I also sense (without actually having had the car on a dyno yet) that there is a very strong "bulge" of torque at a relatively low RPM. And (also seat of the pants here), the torque curve stays very robust PAST 6000 RPM. A very inviting stretch of Montana highway provided some proving ground for me in the "north" of 6000 RPM realm... The massively ported cylinder head (in concert with the cam and turbo) simply does NOT run out of breathe. Ask me about it in private...