Do you have a project going or will you be starting a project here very soon and just want to keep a log of everything you and when? Share with everyone every step of the way what sort of progress you are making on your project.
Post Reply
157 posts

i guess we'll have to see tomorrow

you doin stripes!! ha i win


i guess it was a little too easy of a guess but yeah, new glass!!!!!
i can see now! and theres no crack to reflect the sun into my eyes!

also got my front/back lip kit on. can't wait to get the sides painted
and put on. might also have some tinted stock tails soon as well

been some time since my last update.. so i worked with what was
just sleeping in the closet. didn't get too much done, but progress
is progress

started off with replacing my negative battery terminal which was
corroded to hell... autozone also ended up giving me a positive
battery cable that wont fit the car, and they wont take it back
because i had left the plastic case in my trunk which melted since it
was so hot.

anyways, on to the pictures:

guts hanging out.. i still couldn't figure out how to unclip that damn
throttle cable so i just let the intake hang..

when i first picked up the car, this was covered entirely in corrotion.
it ate away the metal so there was actually some missing parts!

not that any of that is great news.. so i finally decided to use the
nightshade i got for christmas. lets just say i wouldn't classify
myself as a painter..

eventually with enough coats it hid most of the flaws, and it didn't
really matter how dark i went since i don't even have bulbs for the
fog lights

so i guess this is my version of fog deletes

someone buy me retro's?

and lastly, i got me some tinted tails. i didn't favor the color contrast
of the pin stripe on my rim with the red in the old tail lights i had.

i can't really tell if they tinted these with vinyl or nightshade, but
either way my tail lights still light up pretty well! i've got led bulbs
coming my way soon though since i can't see shit when im backing
up.. 5% window tint + tinted tail lights..

im also debating nightshade or tint vinyl for the third brake light.
suggestions? i might just put another led bulb in the third light too.

Tint the third brakelight yourself man. It's not hard to take out. Surprised you didn't just do the taillights yourself either.

Either way, it all looks good man. so i decided to just tint the third brake light myself and soon put
led's in all of my rear lights to brighten things up a bit. and the tails
were only $50 shipped and i didn't want to screw them up so i just
felt safer having them tinted by someone who knows what they're
doing lol.

and thanks everyone, comments = motiviation!

Going in the right direction!

On and btw, LEDs in your tail lights aren't going to help it make it brighter, unless you're getting a spider led or a tower. The tail light was designed to reflect light from the reflectors behind it so it emits light throughout the tail light 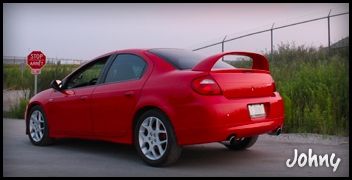 Taught by the best in the biz

I Might need some added back up lights then cuz that's kind of essential.. Lol

Jesse- North shore road?? Hell yeah! I think they're still doing a ittle construction
though. We can get shots with the hoover dam and by the water in Callville!
Last edited by iThane on Thu Mar 31, 2011 10:47 am, edited 1 time in total.

"I know a lot about cars, man. I can look at any car's headlights and tell you exactly which way it's coming." -Mitch Hedberg

thanks bro, i might just go with led bulbs cuz i saw some other cars
around town yesterday with tinted tail lights too and theirs lit up
just fine.

so, on to the man purpose of this thread: UPDATES!!!

first set of upgrades to celebrate the end of my loan.
i can't tell you about the other mod just yet, cuz its not a done deal
and i don't want to excite you all

picked up a vibrant strut bar, and FINALLY got my wires tucked. (thank you srtjesse!!)

no glasspack, cat, or, well, anything to quiet it down. gotta get that fixed

and found this when we pulled apart the engine..

not the prettiest sight...

and a quick snap or srtjesse's neon on the ride home

dang previous owners didnt do their maintanace on time that sux just keep up on your maintanance and it should be fine...

so thats why you slowed down lol good times man. next it will be us going up to your side of town lol

ing looking :\....ew. Everything else looks good though
Top

Awesome man! Glad you got the cables figured out.

Question: what in the world is that huge box in front of the battery???

jesse - yeah man i just hope it cures over time. do our cars require
synthetic oil? my parents didn't think little economical cars like ours
would. but seriously, i've got rims and a welder over here. whatchu
waitin for??

crystal - thanks! i guess?

andrew - that box, believe it or not, is a stock intake system! i dont
blame you for forgetting what they look like though. they're almost
considered rare these days.

iThane wrote:andrew - that box, believe it or not, is a stock intake system! i dont
blame you for forgetting what they look like though. they're almost
considered rare these days.

Haha, I was hoping you would get the humor. Phew!

Some people these days just dunno how to take a joke, ya know?

No, our cars don't "require" it. But it is something to consider as far as taking care of the motor. I plan on pulling the valve cover off sometime this summer and cleaning the inside of the motor, even though I bought the car at 14,000 miles, not sure how it was maintained before. There's also a very in-depth thread on here (stickied in the Engine section) regarding synthetics. I plan on running Mobil 1 5-20 weight with a PureOne Filter in mine on my next oil change.

i know exactly what you mean.

i'll take a peek at that sticky cuz i don't know anything about oil lol.

For sure though, I'm excited to see how your side exit turns out!

The car does look good it was meant as a compliment. The underside of the VC and inside the head....well...not so much
Top

this thread has been dead since april, time to bring it back to life!

picked up some new seats with srtjesse last night, and yess... the
driver seat has a boo-boo

other than that, i've only put my glasspack on my exhaust. i'll post
a before and after video tomorrow showing how much of a difference
the 32" glasspack makes.

whaaatt when did you get those lol