Do you have a project going or will you be starting a project here very soon and just want to keep a log of everything you and when? Share with everyone every step of the way what sort of progress you are making on your project.
Post Reply
255 posts

The black housing foglights look great and are like $55 shipped. I don't use FOGs either since I haven't done the MFS rewire yet for the fogs. I don't like the look with empty holes there. Now if it was all black on the inside and smooth it would look better. Just my opinion. Like some sort of insert to block off random wires and jagged edges
08 Acura TL-S
05 Neon SRT-4
Top

I installed driving lights in the holes of my Kaminari fascia. They were wired to come on with the highbeams. I found that more useful than fogs.
Bill

Awesome, hope they hold up well for you. I have only had good luck with the Eagle Eye brand.
08 Acura TL-S
05 Neon SRT-4
Top

The new headlights are on. 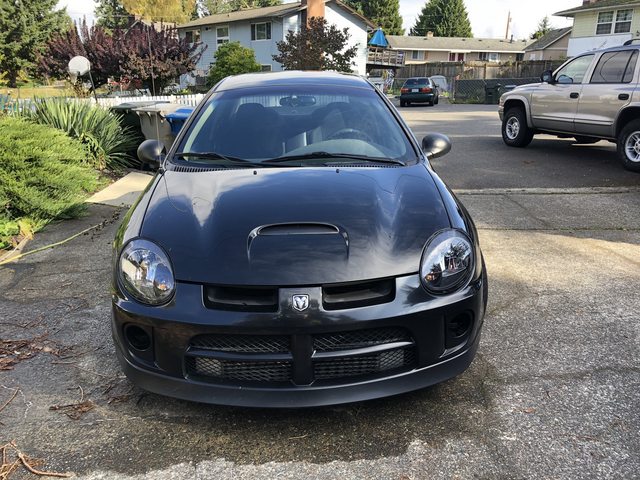 There's a pretty substantial gap at the bottom of them. 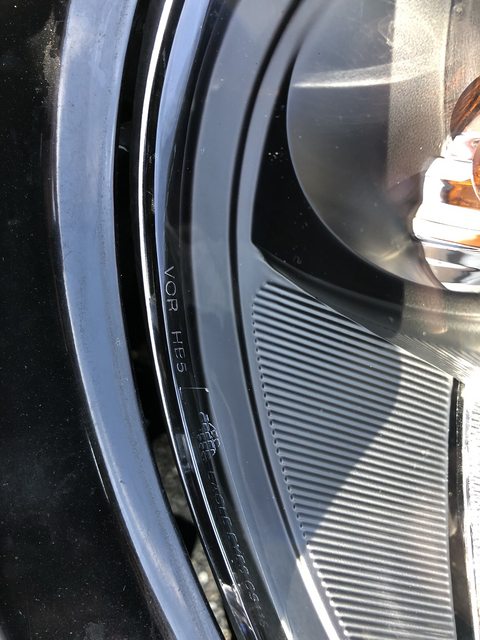 Yeah I had to adjust mine.

I have no gap on mine. You need OEM headlight gaskets.. or something else is off on your car. I think the OEM gaskets help seal out moisture too
08 Acura TL-S
05 Neon SRT-4
Top

Those still suck. The OEM ones are the best. I just checked MPX and they just sell the Depo ones

Check those welt part numbers at Vintage- they have some of them still in stock.
Official "I'm Going To Drive My Neon 'til It Dies" Club #10
Top

Yes. Sorry, I should have been more specific. Hope this helps!
Official "I'm Going To Drive My Neon 'til It Dies" Club #10
Top

JeremyJ wrote: ↑Mon Oct 07, 2019 1:50 pm
The new headlights are on. Let's see how they handle rain. The driver's light is pointed really high and the passenger light is pointed at the ground. It's kind of silly how far apart they're aligned. I'll have to adjust them at some point.


No exciting updates, but I did manage to aim these lights much closer to factory specs. The driver's side is no longer blinding anyone and the passenger side isn't pointed at the ground anymore. It's nice to actually see at night again. The previous lights pointed straight down and the adjuster was on the back of the light, in a spot that required removing them to adjust. These ones have the OEM style adjuster that can be reached through a hole in the core support. Adjustment was easy. No water leaks so far.
02 base -> 05 SRT ACR -> 96 sedan -> 99 R/T coupe -> 02 R/T -> 03 SRT

Good to hear. Didn't know the other aftermarket ones didn't have the oem adjusters. Really hope they don't leak. I never had condensation issues with mine ever. Mainly speaking of my old silver neon srt. Ran those eagle eye ones for a long time on that car with OEM gaskets
08 Acura TL-S
05 Neon SRT-4
Top

JeremyJ wrote: ↑
Fri Oct 25, 2019 11:04 am
The previous lights pointed straight down and the adjuster was on the back of the light, in a spot that required removing them to adjust. Adjustment

The projector depots on my '99 are just as bad. You can adjust them just fine. But to change the bulbs, the headlight had to come out. Or you would have to hack the core support.

If 1gn headlights were just two screws and pop them out, it wouldn't be a big deal, but sadly, it is a small project to remove them. At least that was one of the things they improved over 1gn's. Now if only the screws didn't rust weld in place so easily

I still broke one off stripping the '01. It was a new one, and antiseize'd to the hilt. Good thing the headlights were pretty bad and Depots. I just pulled it until it broke free.

I guess sitting for 4 years in the garage, I neglected to give it a turn or two to keep it from seizing up.

It's been in the low thirties every morning now, so I've been letting the car warm up in the driveway before I take it to work. As I pulled out today, I noticed a small puddle in the driveway. I checked it out and it's motor oil. I have a leak somewhere that only drops when the car is running. I suspect it's been there for a while, given how dirty the underside of the engine is. I've just never seen it leave a puddle before, so whatever's leaking must be getting worse. I did just change the oil recently, so maybe I'll crawl under there and make sure the filter and plug are tight enough.
02 base -> 05 SRT ACR -> 96 sedan -> 99 R/T coupe -> 02 R/T -> 03 SRT

Hopefully it is something simple.

The oil filter on my swap never stayed tight until I put the balance shafts back in. But the Stratus oil filter location is on the end of the oil pump, so it kind of amplifies those vibrations. I literally had to retighten it once a week when I was DD'ing it.
Bill

^Every week? That would really suck!

Jeremy, check the oil drain line on the bottom of the stock turbo. 2, 8mm bolts. Mine leaked a tad on 2 SRT-4's I owned. See if the oil feed line on the top of the turbo is dry too. Also of course the oil pan gaskets which are common to seep on these cars. Could even be the oil filter or the drain plug too. Drain plug doesn't need to be that tight. Always hated buying a car and the idiot over torqued the drain plugs. Oh valve cover gasket if that hasn't been done. Only things I can think of that are typical on these cars.
08 Acura TL-S
05 Neon SRT-4
Top

Cam seals can give issues on the DOHC too, if they push out. Usually the exhaust cam seal, and it runs down the back side.

But they generally only push out if too much RTV was used on the cam cap, and the oil drain slot gets blocked. Or it is really cold out, and the oil is very viscous.

That's one bad thing about not being an original owner, you never truly know what has been done. Luckily if the seal hasn't been damaged, you can pull the cap, clean the RTV out, move the seal back in place and re seal the cap, and continue on. It is worth a shot, as opposed to pulling the timing belt and sprocket to put a new one in. This s only if it is pushed out, it won't help if it is just plain seeping past the seal lip.
Bill

Small update. I had been working with this worn out POS mat since I bought the car. It looked terrible and was absolutely chewed up from years of heel-toe shifting. Massive holes in it. I replaced the front mats with the ones that Modern Performance sells. They cover more of the floor than the stockers and they feel really nice. 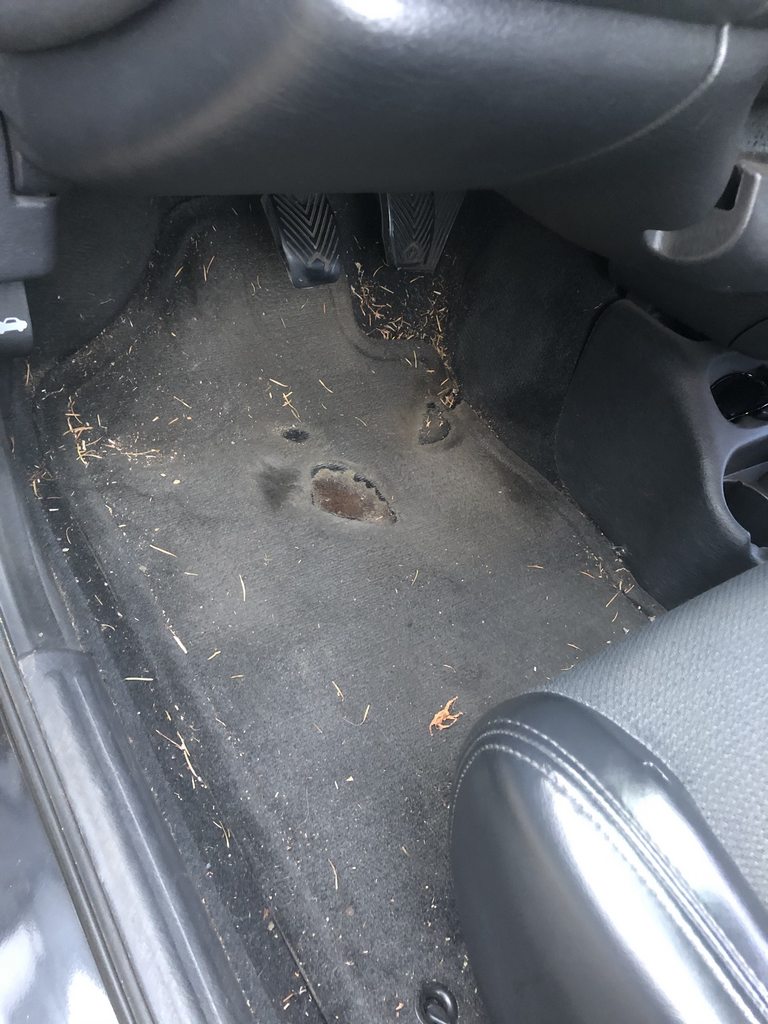 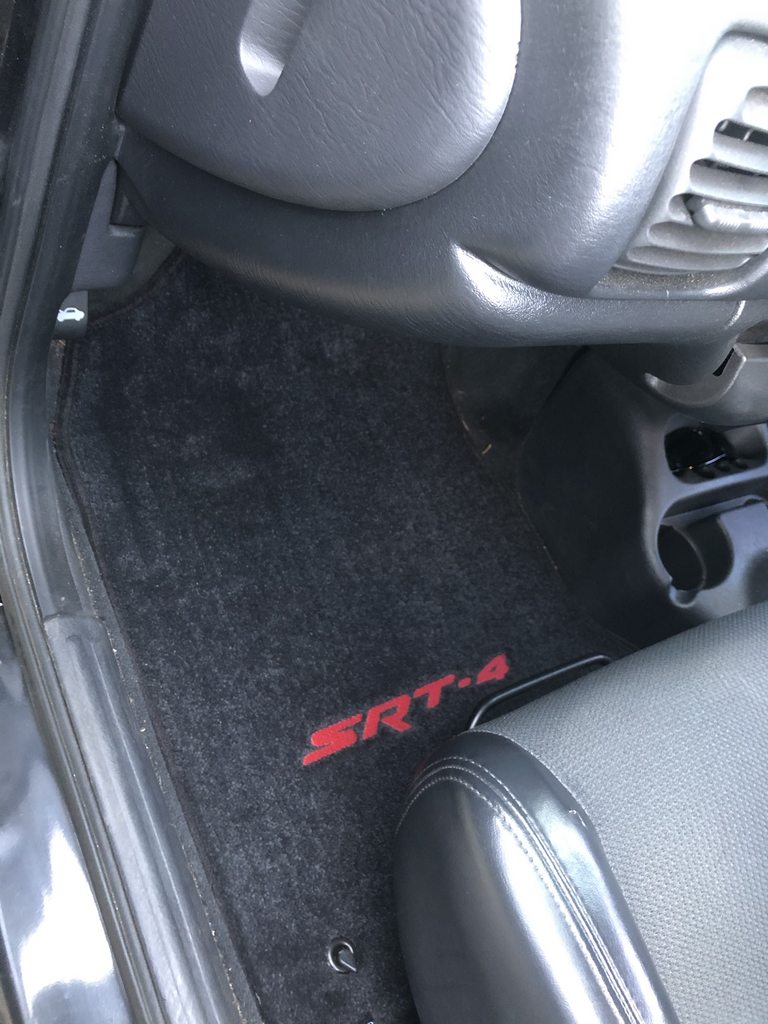 I also purchased a couple of plugs for the motor. My oil plug is nicely rounded off, so I bought a Mishimoto magnetic plug to replace it. I won't get to install this until my next oil change, but it looks pretty cool (not that looks matter for this application). I also bought a replacement tranny fluid fill hole plug since mine is tearing. I plan to check the fluid level and top it off this weekend, so that plug will go in place soon. 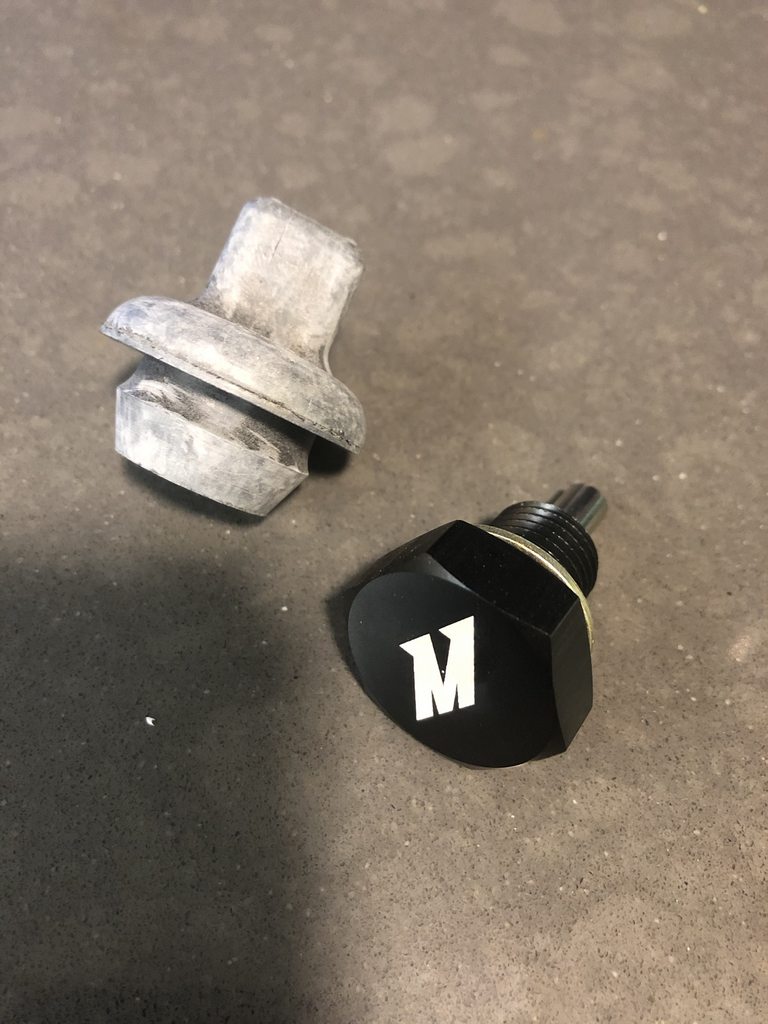 Very nice, love those floor mats, I have the same ones in mine but they are silver/white. Would love the red lettering like yours. MPX just announced Fee shipping for Black Friday and Saturday too on every order over $50. I might have to pick something up that I don't need. Could get a killer deal on a CF hood or trunk...

Might want to look into getting the 04-05 pedals? Those 03 style pedals look so old skool, not a bad thing. That clutch pedal looks worn too haha
08 Acura TL-S
05 Neon SRT-4
Top

JeremyJ wrote: ↑
Wed Nov 27, 2019 5:15 pm
The newer pedals would look great, but I just don't think I care enough to go through the work to upgrade them. They're more than just covers, aren't they? Wouldn't I need to replace the assembly?

The oil filter on my swap never stayed tight until I put the balance shafts back in. But the Stratus oil filter location is on the end of the oil pump, so it kind of amplifies those vibrations. I literally had to retighten it once a week when I was DD'ing it.

I checked under the car over the weekend. The filter had backed off about a full turn and it looked like it had been leaking. I was a full quart low, so I topped it off and tightened it back up. Hopefully that was all that was leaking. I've never had a filter back off before.

Yeah I never had an oil filter back off either.. That is weird. Oil filter doesn't even have to be on that that tight. I just go a 1/8th of a turn after it gets snug.
08 Acura TL-S
05 Neon SRT-4
Top

So I'm on the fence about my next step with exhaust. I have a Thermal 3" cat-back setup in my garage. The Maxxfab 3" catted downpipe on the car, necks down to 2.25" to connect to the stock exhaust (see below) and I want to get rid of that restriction. My original plan was to have an exhaust shop cut off the restriction and then mate it up to the thermal exhaust for a full 3" setup. Now I'm thinking about just replacing the Maxxfab DP with a Thermal catless DP. Either way I end up with full 3" exhaust, but one way retains the cat and the other way doesn't. I just need to figure out how much I value that cat. It's supposed to be high flow, so it shouldn't be a big gain to remove it. 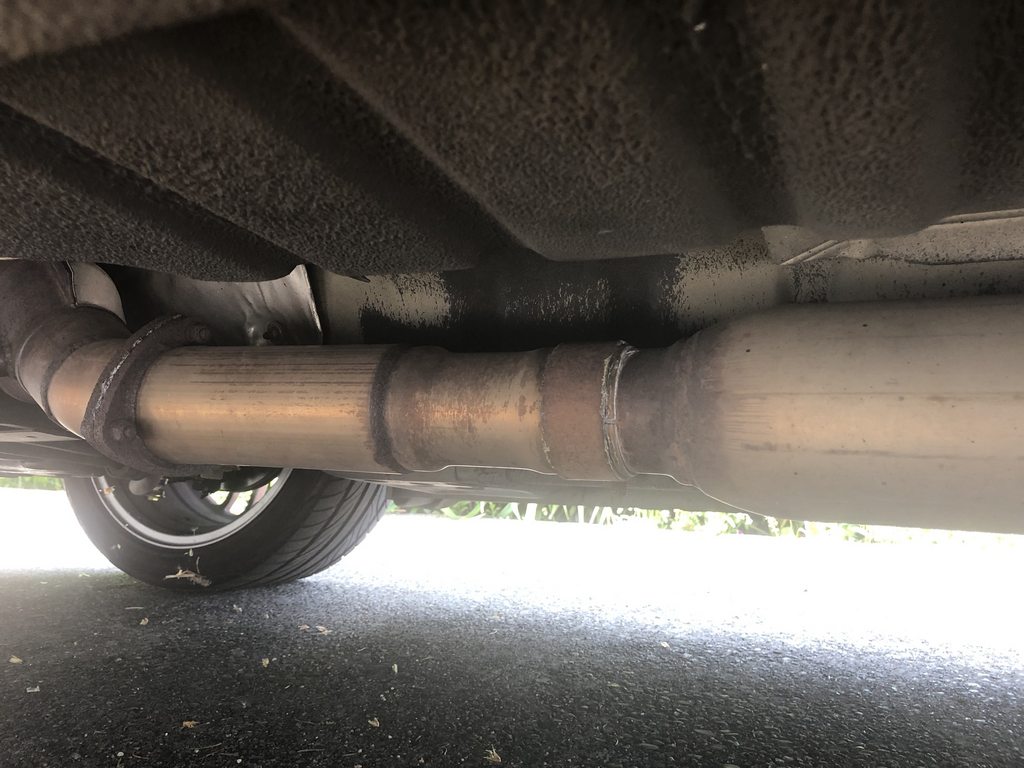 Well Kansas has no emission testing out here. Not sure about Washington.

I say do whatever is cheaper. I am sure a high flow cat as opposed to catless won't be much of a difference. The full thermal 3'' exhaust is the best sounding exhaust I have heard on a stock turbo SRT-4.
08 Acura TL-S
05 Neon SRT-4
Top
Post Reply
255 posts