This is the place to ask questions about your engine components like cams, valves, pistons… just anything that is generally "engine" specific. This also includes questions about exhaust systems such as exhaust manifolds, piping size, mufflers, ect...
Post Reply
7 posts • Page 1 of 1 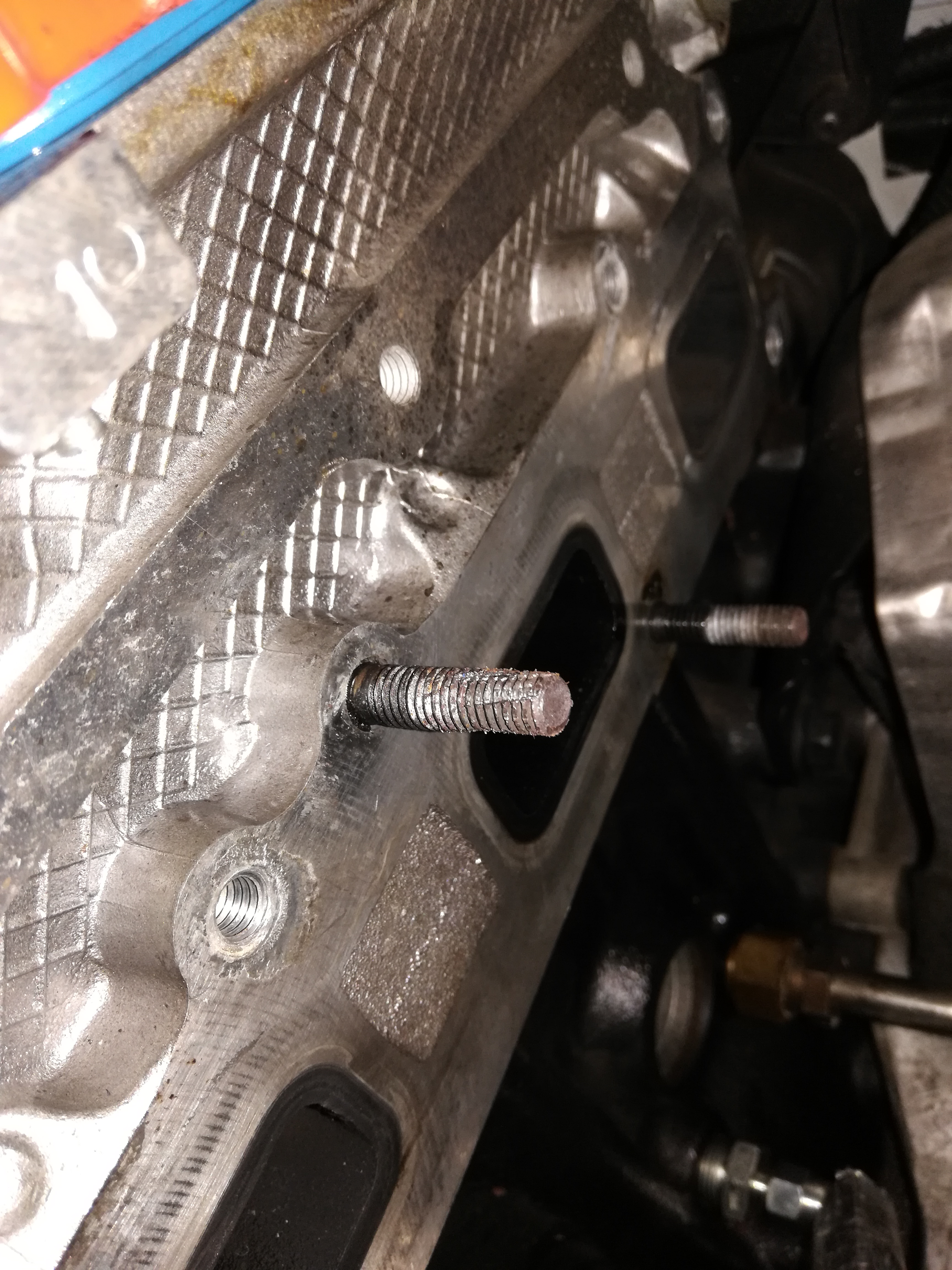 I sprayed it down with penetrating oil and used vice grips and it will not spin loose. The vice grips just eat the threads when I turn. Only other option is a torch or something to get it out? I plan on replacing it with a new one I got from AGP that is a bit shorter. Any tips? I also tried to shock it with a couple soft blows with a hammer too.
08 Acura TL-S
05 Neon SRT-4
Top

If you can get a die to clean up the threads well enough to get a nut on there, thread two nuts down as far as you can, and tighten them onto each other. Then using the inside nut, try to back the stud out. If it is still tight, apply heat.


I have had studs still not budge on cast iron heads, and welded a nut to the end. The heat from welding worked along with the nut not being able to spin. But if you don't have a welder handy, that obviously isn't an option. The double nut and heat ought to do it though.

Edit:
Shorter studs are an excellent idea. I gives less exposed threads to rust, and cause issues down the road. I replaced a lot of oem screws/bolts on my neon, just so there isn't a mile of threads sticking past the weld nuts inside the body. Makes disassembly so much nicer. I could give a crap about originality when the design wasn't the best to begin with. It's just so they can assemble the parts faster, not for making the mechanic's life simpler.

You can bask in the glow of it being all oem parts, as you're having to drill out all those nice screws that broke off trying to get them out of the body/subframe.

Nice, great tips! I wish I would of known that tip about the 2 nuts. Learning process for me. Yeah I am all about things being easier for sure. Main reason for the shorter stubs are due to the design of the aftermarket manifold I have.

I am also going to buy some Kroil. That stuff works wonders.

So a "die" is going to put new threads on it? I have a bolt extractor like this. But I think that is only for the head of the bolt.

I do have JB weld. Maybe JB weld something on it so I can loosen it?

I just hope it doesn't snap the stud. If that happen I am going to have to have my car towed to a shop.
08 Acura TL-S
05 Neon SRT-4
Top 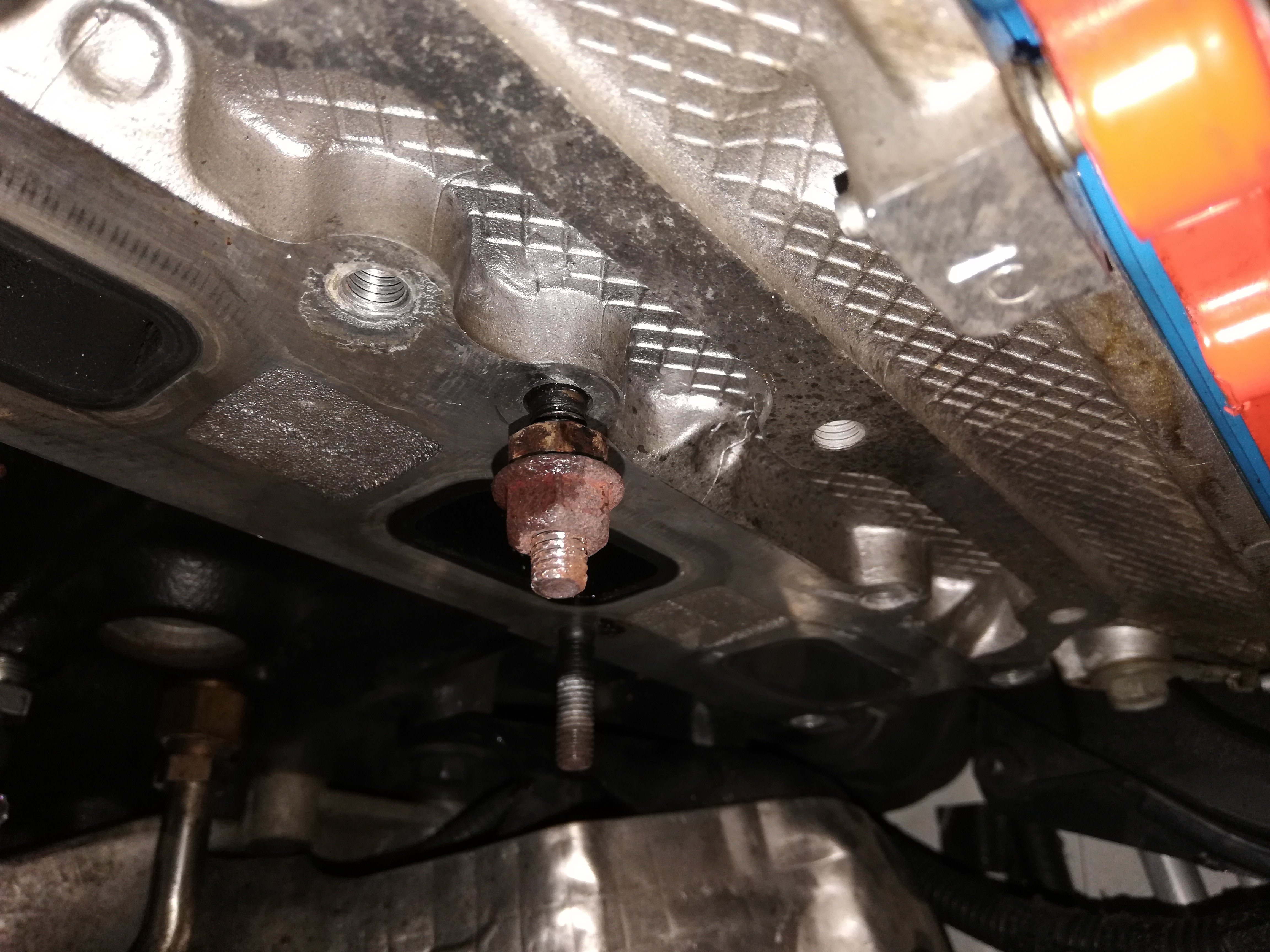 I got a Tap and Die kit and didn't even need to use it. I ended up getting 2 nuts on there, and boy I could not loosen that stud. But since I got those nuts on there. Might as well just say screw and use that stud!
08 Acura TL-S
05 Neon SRT-4
Top

Well got the manifold on but the lower stud in that picture needs to be shorter. And guess what, I can't get that one out either! Luckily the threads are perfect on it. I went to the hardware store and got some serrated flange nuts. Locked them up against each other. No luck. Just spins the other nut.

Not even sure what to do at this point to get that stud out. Not much working space either against that firewall.
08 Acura TL-S
05 Neon SRT-4
Top

Hey guys I got those studs out. Had a buddy come over with a big set of vise grips and he got them out. Buuuuuuuut ran into this, of course.

Might seem stupid but I don't want to risk anything. This is a brand new OEM exhaust manifold gasket. I had only used it once when I had the manifold up on there and had to take it off. But look what it did to the ear portion: 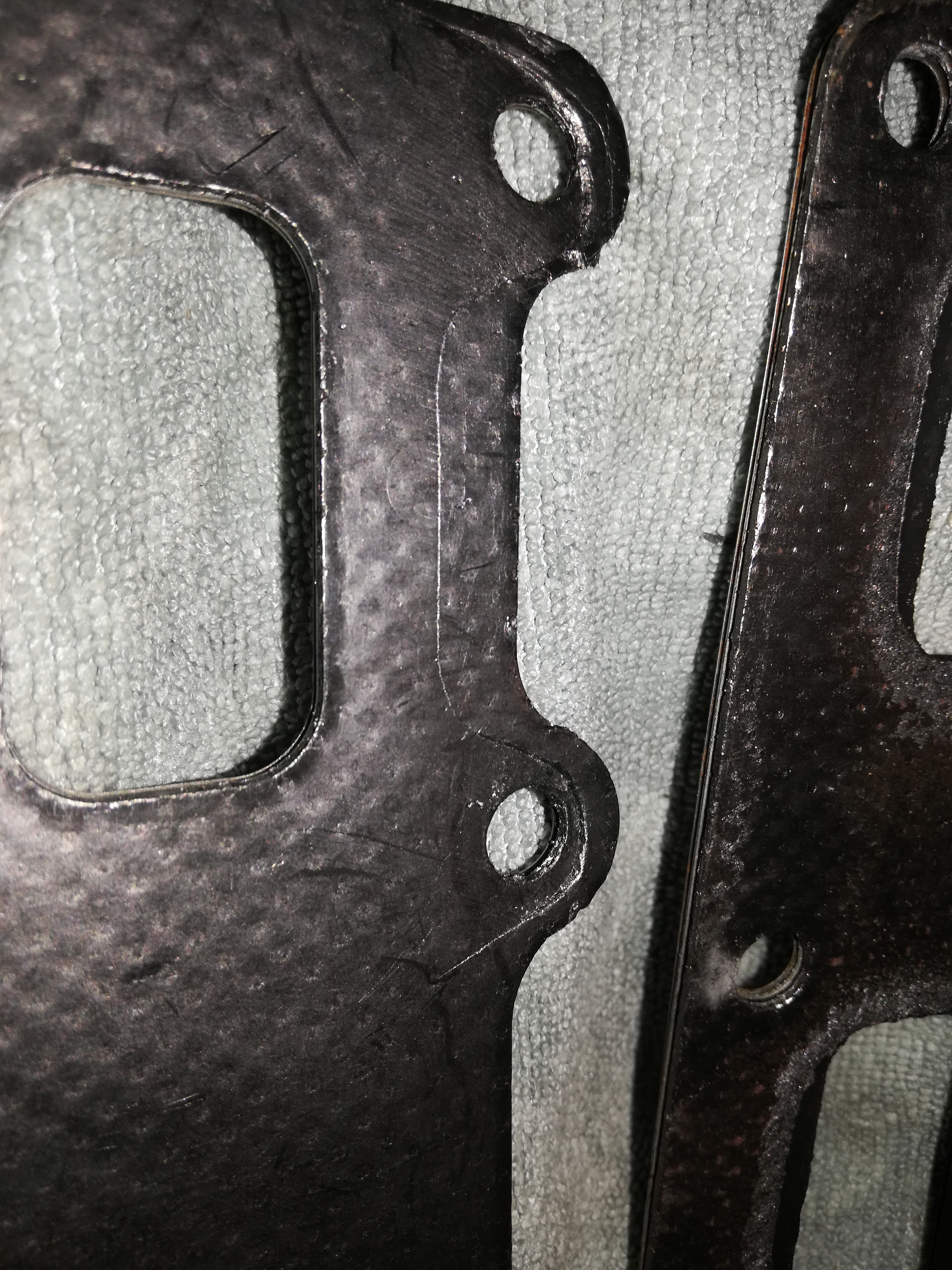 So I am afraid to use it now. Would hate to go through all this work to find out I have an exhaust leak. I bought the gasket from AGP Turbo it is listed at a Mopar part, but it is not a Mopar part. They still haven't changed it on their page. Looks to be a Mahle gasket. That is besides the point. Do I just need to order a new gasket due to the crease?

Compared to my old Mopar one, that is the manifold side you see: 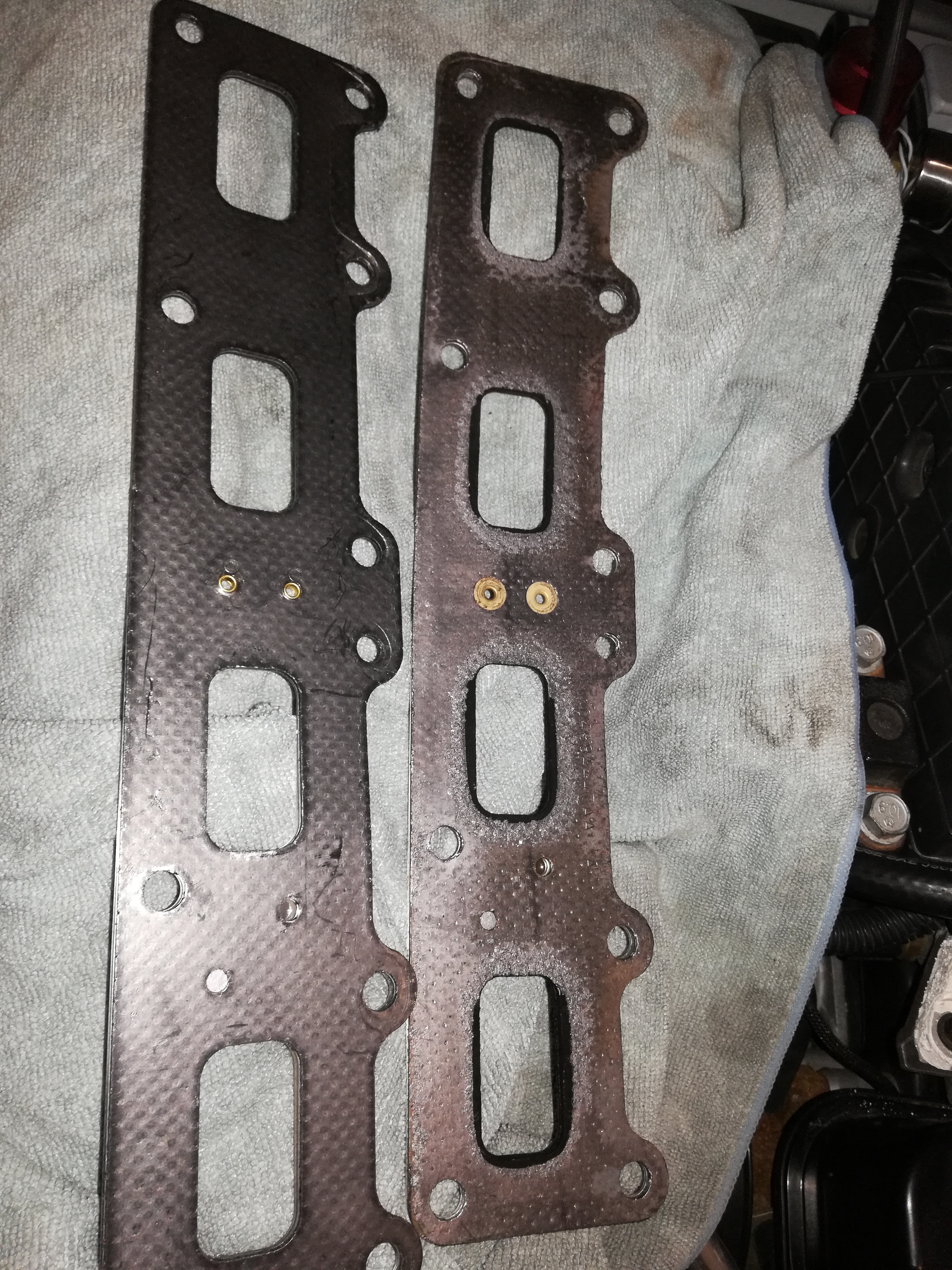 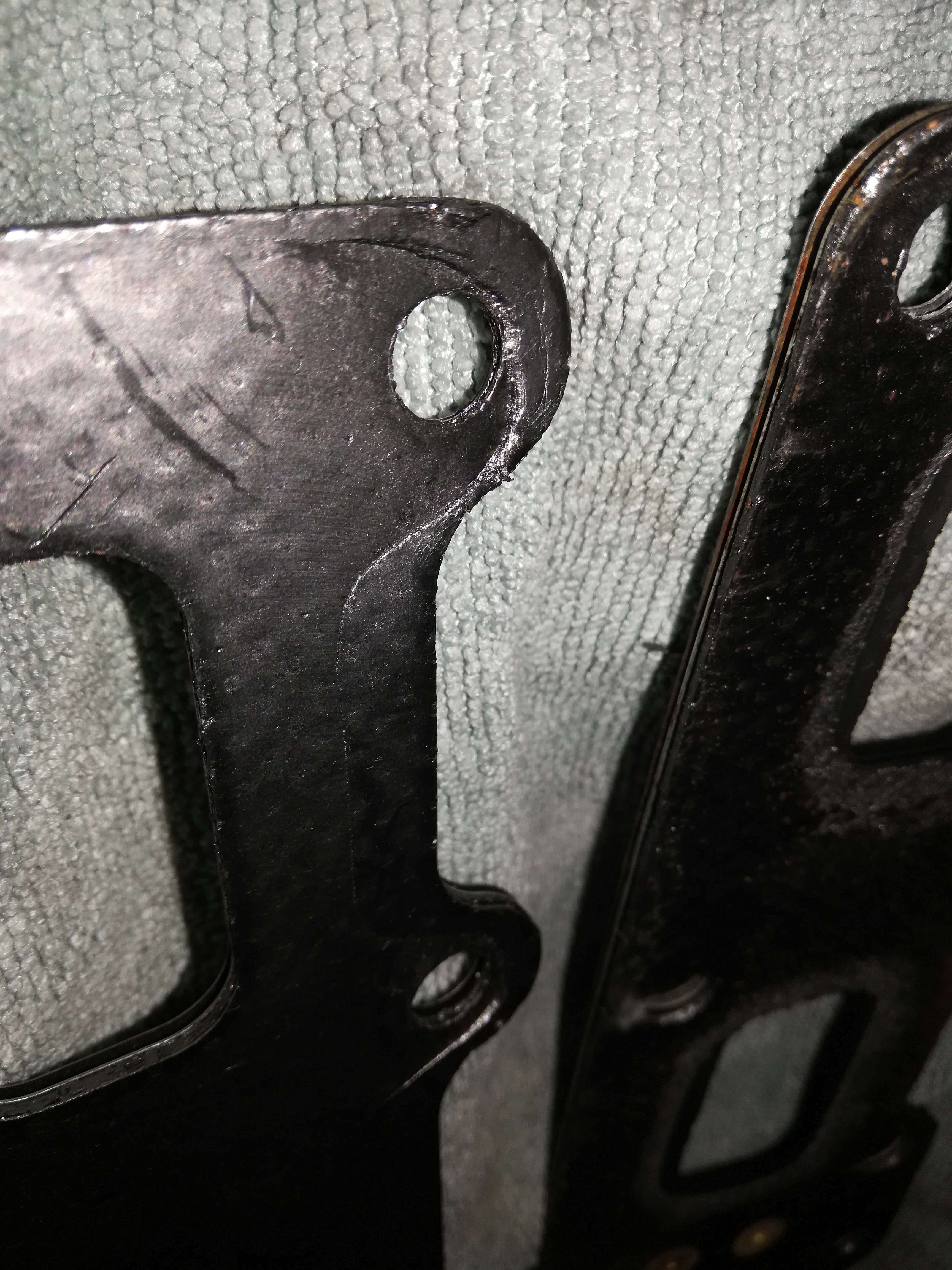 Normally I would say just reuse it since it hasn't seen a heat cycle. But given those ears are pretty well crushed, I think I would get another gasket.
Bill